Why Race and Politics Don't Matter

The census bureau puts out tables of data. You can look up all kinds of things. Things like family income as a function of race and marital status. Here is a summary of the data for 2004. 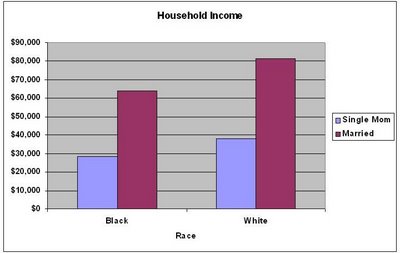 That's pretty dramatic, but not surprising to some of us. As a single dad, I can list some of the drawbacks of being a single dad. It’s a pretty long list.

If you were in the media or politics and you wanted to attack the biggest domestic problem, wouldn’t this be it? So what do we hear all day long? The need for government social programs and the problems of racism.

Yup ..Take more n more money from hard working middle class folks to ahem..donate to 'social programs'..ack!..Middle class parents cant afford to give their own kids tennis or ballet lessons b/c their taxes are busy paying for the inner city kids programs who get to enjoy that and more!

I've had the chance to spend time with congressional and senate staffers from both sides in the last few months.

To a person they are hardworking and well-intentioned. You'd welcome them as friends in your house.

They are also ill-versed in statistical analysis and terrified of appearing religious. Family marital status is the dominant feature in social problems and nothing else comes close.