Too Mellow to Blog Loudly

I’ve got my cup of coffee. The kids won’t be up for another hour and a half. I’ve got a couple of posts I started a while back I could finish, but it just doesn’t seem like the thing to do right now. Last night was another awesome sunset over the Pacific, but they’re so commonplace now that we didn’t even bother to run up to the deck to take the photos. I’ve got a couple of spares to share with you here. 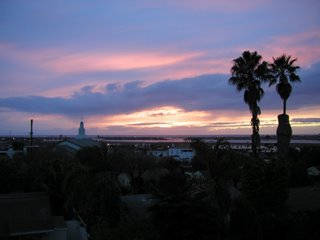 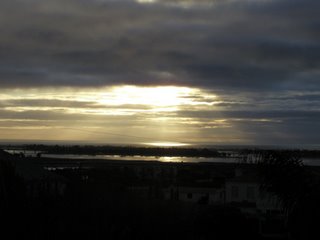 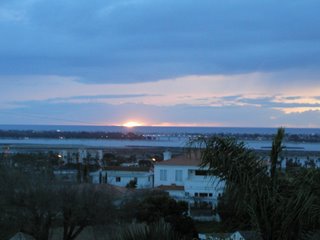 Stop the ACLU had some interesting emails, but I just don’t feel like getting all wound up to mock the poor people who worry that military recruiters on a campus receiving Federal funding are a sign of the Apocalypse. Get a haircut and get a real job.

K T is an independent cat, but last night she lay down on the desk with me while I surfed and blogged. She got upset when the mouse invaded her personal space and we had a short wrestling match, but no photos were taken.

I let Jacob out to run around last night while I sat with him and read. He’s new to our family and he’s a little skittish, but he’s calming down. He really likes sunflower seeds and he now stops what he’s doing and sits up when I come in the room, hoping for the magic seeds. Last night he ran over to me a couple of times, but didn’t work up the courage to climb up and sit on my knee. That will come in time.

It’s supposed to rain this weekend and it looks like it will be too cold for surfing. My son’s baseball game may get rained out, so we’ll have an indoor weekend instead. I’m trying to think of a family project, but nothing is coming to me. Feel free to leave some suggestions.

A few weeks back we made a custom bookshelf for a spot in our house that had odd dimensions. We used white, laminated particleboard and tried to use dowels to make the joints, but without a drill press, dowels are very difficult to use. We ended up making some unusable jigs and drilling unusable holes and then fell back on wood screws and pledging to never move the thing so that it wouldn’t fall apart. It’s sturdy where it sits, but if we move it, the wood screws will pull right out of the particleboard and the whole thing will be ruined. It ended up looking really nice.

As a dad, I want my kids to be well rounded when they leave the nest. Cooking, carpentry, home repair, car repair, literature, music, investing, they should feel comfortable with each. A month or so ago I made a list of the things I wanted to share with them before they moved out (the first leaves in four years or so). I’ll share it with you as soon as I set up my Road Runner home page so I can post html files. If there were things that you wish you had known when you moved away from home, let me know.

To the folks that are still reading this post let me just say thank you. I read an essay by a fellow who, as a young author, got to spend an afternoon alone with Rudyard Kipling. He told Mr. Kipling that he thought the encounter one-sided as the legendary author freely gave advice. Rudyard replied, "Well, you're giving me your time and attention and that's a sign of affection." Not comparing myself to Kipling, I want to acknowledge your gift of attention.