A Model for Pro Athletes

As you may have surmised from hints left in previous entries, I am a huge New Orleans Saints Fan. I’ve spent exactly one day and one night in New Orleans, so it’s not because I was raised there. It’s a long and silly story, but there you have it. I love the Saints.

I watch their games whenever they’re on here in San Diego and I subscribe to NFL Field Pass so I can listen to them on the Internet when they’re not on TV. I read the message boards, read the newspapers on the web and otherwise behave like any other fanatic.

New Orleans has had one playoff win in their entire existence. Winning seasons are almost unheard of. Saints fans are like Cubs fans, loyal to the point of madness. Last year, Katrina wrecked the city, the Saints played elsewhere, the owner threatened to move the team permanently and the team went 3-13. Even by the Saints’ standards, this was a horrible year. The fans were desperate for some hope that the team would stay and that the head coach and QB would be replaced.

We got all three.

The San Diego Chargers decided to release their quarterback, Drew Brees and go with his younger understudy, Phillip Rivers. It seems to have had more to do with power struggles within the Chargers’ front office than football. Drew Brees is considered to be one of the NFL’s top 10 QBs. The Saints had planned to draft a QB, but when Drew became available, they signed him immediately.

There was great rejoicing in New Orleans. They rejoiced until Drew took out this full-page ad in the New Orleans Times-Picayune. 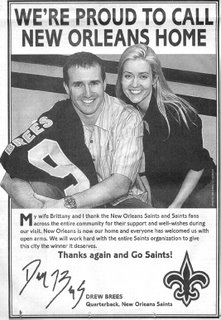 Then they went insane. Here’s a man who has just signed a very lucrative contract and who has no need to court the fans. He has been a Pro Bowl QB and has led the Chargers to one of their best seasons ever. He is highly regarded and is coming to one of the NFL’s most blighted teams. The fans just wanted a good QB and a competitive team. What they got was a top-flight player, a man with a reputation for leadership and someone who cares about the fans.

How often do big name free agents sign with teams and then make public, personal commitments to the fans like this? For my first time ever as a Saints fan, I can honestly say, “The rest of you should be so lucky.”
Posted by K T Cat at 6:05 AM

Excellant Article, i've bookmarked this blog to keep up with your insight on brees

I am a lifelong New Orleanian who was displaced to Nashville after Hurricane Katrina. While here, my wife gave birth to our first child and one of my initial thoughts after he was born was "I wonder if he will be a Saints fan or a Titans fan?" I guess proximity has little to do with fanaticism, this is proven by a San Diegoan cheering for a New Orleans team.

Enjoy, and come visit New Orleans when you get a chance - it's not the same, but it's still different!