The Alliance has spoken. Its oracular powers are not to be questioned. We hear and obey. Though we may lay an egg on this one and leave the field of comedy in disgrace, our heads pierced with fake arrows with those loopy wire things and our rubber chickens dangling limply from our fingers, we sally forth bravely to answer the question:

Having already surrendered the right to print cartoons in a free press, what further concessions will terrorist appeasers make next?

The answer lies not in the terrorists, but in the appeasers. Allow me to quote from the editor who published the cartoons in the first place:

At the end of September, a Danish standup comedian said in an interview with Jyllands-Posten that he had no problem urinating on the Bible in front of a camera, but he dared not do the same thing with the Koran.

This was the culmination of a series of disturbing instances of self-censorship.

What one group values, the other despises. Bravely, the Danes sought to whip out their willies and wee on the work, but were soon wimpily whining for mercy. The French, completely unassociated with the whole thing, followed their natural instincts and surrendered immediately. 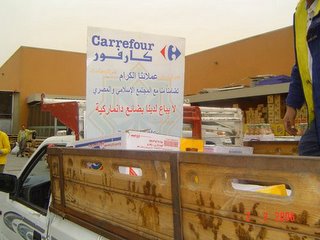 Our dear customers, in our show of support with the Islamic and Egyptian world, we don’t sell Danish products.

Apparently, it is not necessary to invade France to defeat them, you need merely hold protests thousands of miles away against a nation in the general vicinity of France and they will sell you out faster than you can say retraite.

Don’t think for a moment that I am suggesting that our Continental allies are silly. Absolutely not. Danes drawing cartoons to bolster their courage so that they may comfortably relieve themselves on a book causing the French to pull products off their supermarket shelves are all manly acts in the great tradition of Napoleon, Hindenburg and Maurice Chevalier.

Is it too late to change teams? Thank God Bush is in India. They seem like a serious people. Don’t they have some kind of hell-on-wheels monkey god that rips people’s brains out and devours them? Frankly, if the monkey god merely gave you a stern talking to, he’d be several orders of magnitude more fierce than the sheet moisteners on the Continent.

I digress. The assignment was to list the next steps in the path of appeasement. This is way too hard. How the heck should I know? It’s like they’re not even the same species. In the Anglo world, we’re debating whether or not we should launch a full-scale war against one of the world’s major military powers on the other side of the planet to prevent nuclear Armageddon. Meanwhile, Danes are sitting in their artist lofts drawing stick figures because they want to feel as comfortable peeing on the Koran as they do peeing on the Bible.

Appeasement? Their whole lives are an appeasement. They’re a bunch of bed-wetting, skillet-licking, namby-pamby mama’s boys who, when they’re not running away from mobs with sharp sticks, are crawling to the UN for protection. Whole populations are being slaughtered one country over and they’re hiding in their closets because they saw a spider in the hallway and they don’t dare leave their room.

I’m coming to the conclusion that it is not possible for the citizens of the country that gave you people like Michael Fay and Mikal Calvert to comprehend the actions of people like Jacques Chirac.

I’ve written myself into a corner. I need an answer. At this point, any answer will do because I’ve convinced myself that I can’t come up with anything nearly as self-humiliating as what they’ll actually do.

I don’t know, how about this: the Continentals will all get together and write a document with hundreds and hundreds of pages of twaddle that will supposedly bring them together so they can finally have the spine to stand up to a bunch of 16th century savages and then they’ll fail to pass that document into law because they can’t agree on how many toys the government will put in their Happy Meals.

There. That’s my answer.

What? They already did that?

Forgive me, for TypePad has sinned and is giving me fits today. It sent two trackbacks to the precision guided humor assignment, you only need and want one. Please delete:
Precision Guided Humor Assignment (Danish, doughnuts and doo-doo from Right Truth

Sorry and thanks
A million pardons, guess I will have to eat one of those doughnuts, heh
Debbie