A New Lawn Refutes the Decline of Civilization

With apologies to P. J. O’Rourke and his essay in Republican Party Reptile, Ferrari Refutes the Decline of the West.

I’ve taken to reading the blog, Storming Jericho. His post on the End of the World as We Know It bears some discussion.

I first started thinking about the direction of the changing world a few months ago after reading this entry by Cicero on Donklephant. Here Cicero discussed the notion among many Americans that the nation is coming apart at the seams, beyond anyone's ability to repair it.

Among the elite, Ms. Noonan relays an anecdote about Senator Ted Kennedy, as told by Christopher Lawford, Senator Kennedy’s nephew, in his book ‘Symptoms of Withdrawal’:

For those of you who read my blog for cats and humor, let me summarize my response so you can move on to the next post.

Get over yourselves! Christopher Lawford, Peggy Noonan, Ted Kennedy, what is this, The Great Gatsby? Who gives a rat’s ass what these people think? Here’s what concerns normal people: 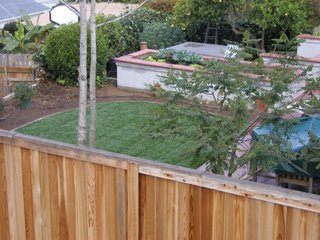 That’s my neighbor’s new lawn in their backyard. They had a landscaper put it in last week. Maybe they needed it so that when they were overcome with existential ennui and passed out from overwhelming fatalism they had somewhere soft to fall. Or maybe they wanted a new lawn.

In the echo chambers of the self-important, this kind of conversation may be intriguing, but for the rest of us it’s downright ridiculous. A recent post on IMAO by Laurence Simon discussed the choice between going to an Astros game and seeing the cast of NRO play a baseball game as a fund-raiser. I like NRO, but let's be serious. The Astros are professionals. As for the NRO staff...Oooh, is that Ramesh Ponnuru at the plate? Oh, the glamour! I’m all a-twitter!

Stop and think about the event Peggy Noonan described for a moment. Uncle Teddy is getting pickled and some idiot is writing down what he has to say. Imagine that at one of your parties with your friends.

Heather Johnson knocked back her fifth margarita and as she slid to the floor off the tattered couch was heard to mumble, “We’re all screwed.”

Hey, Heather was drunked up said the country is going to the dogs! I feel so lost and impotent! Let’s write a column about that!

I’ve got a better idea. How about if Peggy Noonan takes a deep breath and then visits a Home Depot on a Saturday. I’m sure we can find one on Martha’s Vinyard or in the Hamptons. Let’s see here… well, there’s one in Hyannis. That should be close enough to Thurston Howell III and his friends so Peggy will feel right at home as she drives over to rub shoulders with us filthy proles. Afterwards she can sip a few glasses of Bollinger on the Kennedy yacht to wash away the sight of normal people doing constructive things to make their lives better.

Here’s a suggestion for a new column, Pegster: If the world sucks and we’re descending into a bottomless pit of despair, how come people are buying PVC irrigation pipe and drill bits?
Posted by K T Cat at 7:37 AM