Before I get started, let me make a few things clear. I work with the Navy and Marines. They are the coolest. I think Sheehan is a publicity-crazed, narcissistic maniac. There. I put on my anti-flame suit. Last time I did this I got all kinds of hate from people I agree with, calling me a troll and worse. Now that I've buckled up and put on my asbestos underwear, let's release the brakes and let it rip. 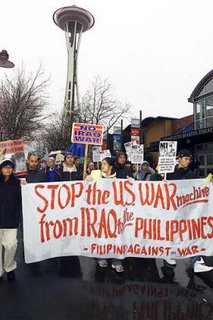 Have any of you ever been to a demonstration? Not necessarily as participants, but perhaps as bystanders or just walking past one. Have you ever noticed how dreary and tiresome the whole thing is? What a waste of time it is? I mean, back at home, the demonstrators have carpet that needs cleaning, dogs that need washing, plants that need trimming and it’s all going to seed. Meanwhile, they’re out yelling about global warming, war, all manner of large-scale problems while the ones they can really do something about go unfixed.

There are lots of better ways to spend your afternoon if you’re committed to saving the world. Hospice, Catholic Charities and the Special Olympics come to mind.

Michelle Malkin writes today about an anti-Cindy Sheehan protest planned in Germany where Ms. Sheehan is protesting something or other. I think Cindy's protest has something to do with strudel. I started reading about it and dozed off. I find her incredibly dull. Sort of like a symphony with one note.

I’m sure the protesters are very well intentioned and are deeply committed to the cause of anti-Cindy Sheehanism, but I would like to suggest a different approach. How about a get-together based on something productive or fun that just happens to also feature a unified position on Cindy and her antics.

How about a picnic with a softball game? 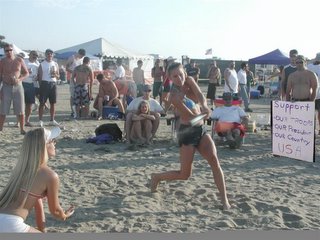 How about repairing an old house for a senior citizen? 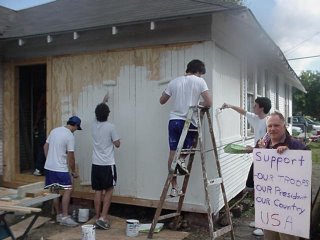 How about a 10K fund-raiser for cystic fibrosis where all the participants wear some anti-Cindy slogan instead of a number? “And the winner today was Cindy is a nut with second place going to I support the troops! Thanks to all of you, we raised $5,643.29 to fight this terrible disease!”

Just a suggestion. I noticed on the protest website that they’re in need of the standard items required for any big gathering. Wouldn’t it be easier to find donors if the cause was a big BBQ? Wouldn’t it be a lot more fun? 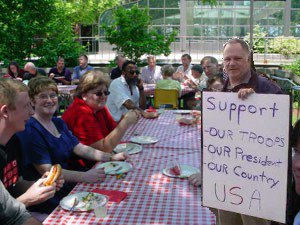 Best of all, can you imagine how enraged she'd be at the sight of people having a good time and doing productive things while protesting her? Her kind are the most humorless, self-important toads in the world. What could be worse for her than to be mocked while wahines in bikinis swat home runs and everyone has a beer?

Noeli raises a good point in the comments. She also has a blog, go check it out.

What makes the US military distinctive is how it advances civilization. Palestine has a military, too. At their core, both militaries exist to break things and kill people. The difference is how they’re used.

Taking Iraq as an example, the success of the US military means more schools, a better infrastructure, more jobs, a stock exchange, democracy, newspapers and blogs and so on for the Iraqi people. With some exceptions, a military does not create things. The US military makes it possible for others to create things by protecting productive people.

In contrast, the Palestinians simply blow things up. At the end of the day, the per capita income of the Palestinians is no better off for having had a military. In fact, their car bombs and shooting guns in the air actually destroys things that could be used for productive purposes. Somalia would be another example of this. They have a military, but it’s actually to their detriment rather than their advantage.

If one of the key features of our military is how it advances civilization and productive lives, wouldn’t it make more sense to make your displays of support for them productive as well? Let the other side march in circles, chanting. That produces nothing of value at all and no one’s lives are better because of it. I’m suggesting that our “counter-protests” be highly publicized acts of charity.

No matter the venue, the protests on either side will get no more than 90 seconds or so on the news. At the end of the day when everyone packs up to go home, without anything else having been done, it will be those 90 seconds of publicity that will be the end product. If you make your protest repairing run-down homes for the handicapped, then at the end of the day you have your 90 seconds on TV and some fellow citizens have a better place to live.

Making life better for all of us is what the US military is all about. I’m suggesting we carry that theme into our counter-protests. Thanks for the comment, Noeli.
Posted by Jacob the Syrian Hamster at 6:10 AM

Bless your heart I know you mean well, but do you understand YOU SOUND JUST LIKE CINDY SHEEHAN? At least tactic wise?

Go home, do semething else, and give the sheenanites and all her gropies the idea that they aren't countered in any way by anyone.

Do you really mean to give that impression? Do you have another idea than "do something else anything else but show your support for the troops and counter the idiots?"

I don't mean to flame you, but just point out that you sound like her "give up and go home folks because it is useless."

If you have a unique idea that will still show that there is a side, a large vocal powerful side, that is against all this twit stands for I stand ready to listen.

I don't think you want to confuse me with my Sister Noelie, and yes it can be very easy to mix us up! Her blog can be found here.
http://nefrytatanen.blogspot.com/
I know it is confusing because there are 4 of us sisters and we all are contributers to each other's blogs, and we have one we share.... Oooooo, scary isn't it!
Thanks for coming by to visit. It was very nice of you!

Doin productive things is a spiffy idea!..spread the word KT!

Well I am just glad you didn't hold my comments against me too much! :-)
As I further clarified in my answer on my blog, is that I am a mother of a US marine that might finally soon be home from his second tour of duty in Irah.

Cindy Sheehan brings out the worst in me. :::Sheeepish::::::