What Makes the NYT so Liberal?

Don Surber has the latest approval ratings figures for the NYT and the results break down fairly strongly on party lines. Here's a quote from the Rasmussen Reports article he references:

By a 50% to 18% margin, liberal voters have a favorable opinion of the paper. By a 69% to 9%, conservative voters offer an unfavorable view.

Just as a reference point, here is the NYT stock performance over the last five years. 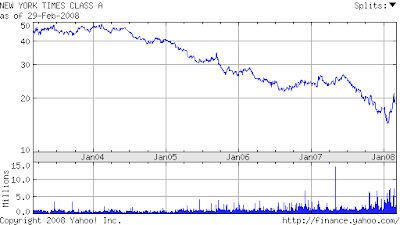 NYT stock has lost about 60% of its value in the last five years in the middle of a bull market.
So does the Times cater to its readers or do the readers flock to the Times? You can bet that almost every employee of the Times knows about the falling stock price, their underlying financial problems, the declining circulation figures and their loss of advertising revenue. If I worked for such a company, I'd be edging towards the door.

In the board room when the doors are closed, do you suppose they wonder what they can do to attract a broader base of readership? Take a look at this chart of stock transactions by insiders. NYT management is most certainly hit in their wallets by the falling stock price. So just what is it that keeps the NYT printing partisan calumnies like their recent slander of John McCain? Are they so taken up with their own idealism that they see themselves as the last bastion of Truth and are willing to go down with their values intact? Do they see the decline as inevitable and themselves as powerless to stop it? Have they decided to cater to their strength and are they pandering to their existing supporters? Do they blame everyone but themselves?

Note that the financial problems the NYT faces are faced by nearly every newspaper in the country. This post could just as easily have taken a look at a newspaper with conservative bent (what few there are) and asked the same thing.

Are economic realities pushing newspapers towards a homogenized coverage of the world?
Posted by K T Cat at 6:53 AM

KT, feel free to grab photos from my site at any time:) I appreciate your support! Your site is great too, very informative;)

I think it's a cycle.

The NYtimes set itself against the only opponent that would stick around-- the gov't, basically-- because conflict sells. The liberal side of things has the "underdog" advantage, story-wise, because they're always "fighting for change."

So they went hugely liberal.

That meant that, slowly, the conservative folks stopped buying their paper, while the liberal ones started buying it more.

That meant there was more demand for liberal stories, and the conservative folks who stayed got fed up....wash, rinse, repete.