...helps out in the garage. 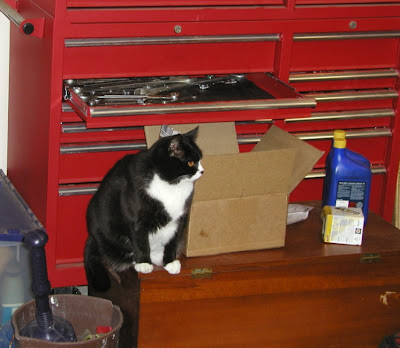 Yesterday's fun and games with the MGB went a lot smoother, but I still had to stop before I wanted to. I had the pistons ready to insert into the block and I couldn't find my ring compressor. Two moves have taken their toll on my tools. I have no idea where the thing is any more. It was late and the car parts stores were closed, so I decided to install the oil pump instead. That's when I opened all my boxes from Moss Motors and found that my gasket sets were back ordered.

Having said that, I've got the crankshaft installed and it turns very smoothly now. The only delicate thing left to do is the pistons and I've learned from my last engine rebuild how to be careful with those. If I had the parts I needed, I'd be on my way. Oh well. They'll come in their own good time.

Update: Whoa, Nellie! Moss Motors just told me that my gasket sets on back order wouldn't be here until the end of March or even later. I had chosen the high quality brand. I told them to send me the regular gasket set instead and will get those on Monday. I wish I'd called earlier!
Posted by K T Cat at 6:49 AM

Thanks for submitting KT to Carnival of the Cats #208 hosted on our blog!