Fritz is a Fatty

Once they overran French lines and wore the laurels of victory. Now they overrun buffet lines and wear suspenders to keep their pants from falling down around their ankles. The mighty Wehrmacht is now made up of fat tubs of lard.

German soldiers are too fat, don't take enough exercise and smoke too much, according to an annual parliamentary report on the state of the country's armed services.

The report, due to be presented later on Tuesday, said that 40 percent of all army personnel are overweight, compared with 35 percent among civilians.

Some 8.5 percent of soldiers were even grossly overweight, the report said. 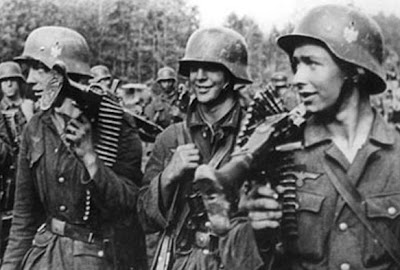 This is not an image we'll be seeing again soon unless those machine guns are replaced by buckets of KFC.
They're even fatter than the German civilians? That's pretty sad. No wonder we don't get much help from them when there's trouble around the world. The Luftwaffe probably lacks adequate heavy lift cargo aircraft.
Posted by K T Cat at 1:21 PM