I got back late last night from a trip up to Paso Robles to do some wine tasting and take in the scenery. I had been up that way before, but never with the eye that I had this time, wondering what it would be like to live up there, perhaps after retirement. This is what I saw. 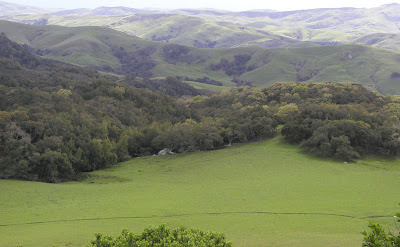 I had to crop the sky and ocean out of this picture because its gray haze saturated the image, but the view over the top of these hills is the Pacific Ocean. Paso Robles and the surrounding areas were spectacularly beautiful. Houses and land there are far less expensive than San Diego and there's plenty of room for a barn in which you can restore cars and do all manner of other interesting things.

I came away deeply impressed by the place. If you moved there after living in San Diego for a few decades, you'd definitely face some culture shock as the living is far more rural. The weather is colder and there was ice on the ground in some places left over from hail the night before. The coast was beautiful and unspoiled. That in itself was very unlike San Diego where you have to time your beach visits against the grain of the majority of the population unless you want to face massive crowds.

Amtrak has decent service between San Diego and Paso Robles, so coming back to San Diego to visit people would not be such a chore. The Pacific Surfliner is a very pleasant way to get up and down the coast so long as you don't have a tight schedule to meet.

KT, Sounds like you had a good time. Welcome back.

I expect that you at least remembered to give a wave out the window as you drove back through Thousand Oaks????

The Santa Ynez wine country is a pretty place to wander....walk up and down the little streets of Paso, such a relaxing time.

Whose brilliant idea was it to plant the flippin' flagpole right in the middle of the intersection though?
Wollf