The Road to Soccer Success

Yesterday my daughter tried out for a soccer club. As I sat there and watched, I could hardly believe my eyes. Last summer, when she was starting her most recent rec league team, she had no idea what position was what or where to play, she spaced out during the games, she was afraid of the ball and she only wanted to go to practice so she could hang out with her friends. Now she's trying to join a soccer club and has worked hard to get there. 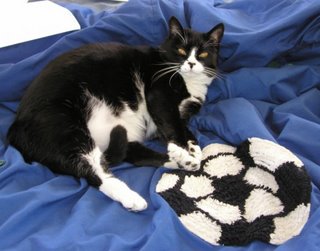 Our Maximum Leader has played a role in this, too, by drawing attention to soccer ball-emblazoned bedspreads.
I had a small hand in all of this. I kept trying to get her to go down to the park with me and practice, but she would frequently be distracted by the dogs that were brought to the park. Something finally clicked about halfway through her rec league season and she became the perfect little defensegirl goon. She was hip checking other players, shoving the forwards off the ball, and finally understanding her job as a defender.

From there we went on to practicing as often as possible at a local outdoor handball court. Kicking the ball against the walls of the handball court made for fun games, a much faster paced practice and about ten times as many touches of the ball as playing out on a grass field. Her skills improved dramatically. Finally, I hired a varsity soccer player from a nearby Catholic girls' high school to give her private lessons. That's one of the best decisions yet. The tutor is a wonderful girl and my daughter absolutely adores her. She's been a great teacher and has encouraged my daughter and even come to some of her games to watch.

About 5 months ago my daughter was utterly lost on the soccer field. Yesterday she went out for a club soccer team. After the try outs she told me how much fun it was and how she really wanted to be a part of the club.

And indeed, the Maximum Leader appears to approve!