The US Needs iPod Independence!

I got this idea from listening to the author of Gusher of Lies on the Dennis Prager show just now. His argument is that the whole energy independence thing is a fraud, a position I totally agree with. (We're also not tungsten independent. Tungsten independence now!) The discussion they had over the US funding of terrorist groups through the importation of oil made me think that we need to be iPod independent now as well. Here's the reasoning.

iPods are manufactured in China. China oppresses its people, engages in industrial and military espionage against us and is in an arms race against us in the Pacific. By buying iPods, we are supporting a nation that is diametrically opposed to us! 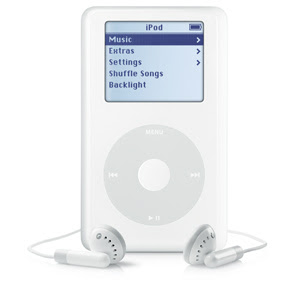 By buying an iPod, you are oppressing Tibet.
Posted by K T Cat at 10:32 AM

Truthfully, I never thought of it that way, but you are completely right!

Of course another way to slow the Chinese down would be to stop borrowing money off them to hold a war or two in the Middle East...

(You just knew that was coming, didn't you? [Grin])

That's why I own a Zune!

According to the first link a lot of the Xbox is made there too.

aon, darn near everything is made from at least components from China these days. That's the whole foolishness of the logic of funding terrorism by buying oil canard. By being a member of the global economy, we're funding the good and bad alike.

That's why we have the US Marines. To make sure there are as few bad people as possible.

One of the “Top 10” tax increases proposed by Legislature so far this year:

10. The iTunes Tax
Assembly Bill 1956 (Calderon) would require state tax officials to begin imposing sales taxes on music, movies and software purchases made online, such as on iTunes. Democrats have also talked about taxing all items purchased on the Internet ($500 million tax increase).