It's All a Game to the Politicians

The more I think about the tortured primary process on the Democratic side and the gerrymandering of districts done by both parties to make sure that incumbent congresscreatures have safe seats, the more I come to the conclusion that it's all a game. In a previous post I suggested that Markos Moulitsas and Rush Limbaugh be incarcerated during the election because of their attempts to game the system, but I don't think that's the problem any more.

The problem is the amount of power and money given to the government.

First off, why would you give any more money than absolutely necessary to the dingbats who thought that this was a reasonable congressional district? 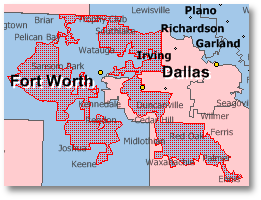 A single congressional district in Texas. Image from manifold.net.
Why hand over any more control over the economy to people who can't even come close to balancing a budget? Would you give control of your investments to the most profligate member of your family?

How about giving control of our health care system to the people who created the tax code? Have you seen this year's various income tax schedules? Are they the way you would have designed them? Taxes are just how you pay for the services your government provides. Is this the way you pay your electric bill? Why do you expect clarity from your utility company, but not from the government? And why do you want to give them still more power over your life?

Dean from our Monastery of Miscellaneous Musings was right in his comments on this blog. You can't blame Rush and Markos for trying to game the system. The whole thing is a game to the politicians. The logical extension of this thought is this:

Why on Earth would you let these people game any more of your life than you had to?

Update: Our Cantor of Chemistry has a very reasonable approach to the primaries. Ha! Let's just see that get enacted.

We can thank the Texas Two-Step for clearly showing how the caucus method of allotting delegates is cracked. The caucuses favored one candidate (Obama) mere moments after the wider electorate chose the other (Clinton).

"First off, why would you give any more money than absolutely necessary to the dingbats who thought that this was a reasonable congressional district?"

I haven't. I have not cast a ballot for a single republican for either the state legislature or the governor's office, nor did I vote for the republican that was running in our district for Congress back in 2004.

Like I said before, Texas' 2003 redistricting (yes, 2003!) was Tom DeLay's pet project to get more republicans in congress. It was a freaking zoo when it went on here, including two bouts of Democrats leaving the state so the legislature couldn't have a quorum.

The whole thing was a mess. I know it's Wikipedia, but this seems to have what happened nailed down pretty solid.

KT - Thanks for the link.

Just flew back from a trip back east (and, no, my arms are not tired).

Sadly, since you think it is reasonable, too, I suspect that there is no chance for it.

I still want the districts to be based off of counties.... They exist already, and it's really hard to screw with that....