So I have to admit that I'm confused. Just which hypersensitive, perpetualy aggrieved team are we supposed to be rooting for? Is it the team of Orlando Patterson who saw racism in Hillary's 3 A.M. ad against Barack Obama? Or is it the team of Geraldine Ferraro who is sick of the whole racism schtick and wants everyone to concentrate on the real problem, which is just how lousy it is to be a woman?

Can't we all just get along?

I suggest we nominate Michele Obama for president. That way we'll have someone who can find racism under every rock and shrub during those times she's not berating her husband in front of thousands of people for being such a dingledork. 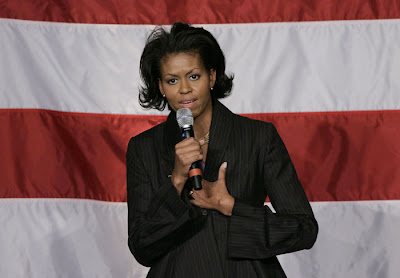 Michele Obama: Everyone agrees, it sucks to be me!
Posted by K T Cat at 5:06 AM

You know I just don't understand the issue with Geraldine Ferraro. She seems to have forgotten that she was chosen to be VP because she WAS a woman, not because of her experience, which was near nonexistent. She wasn't anyway near the first choice.

Her second comment is the most bizarre. Women have made far more progress into the corridors of power than black men. Black women are especially well represented. And last time I checked, white women were not being sprayed with fire hoses and attacked by police dogs for speaking up for their civil rights in the 60's.

Actually, in a later interview, Ms. Ferraro actually says she was chosen because she was a woman. She knew the calculus back then.

KT, I am so sick of all the Candidates, their handlers....yuck.

I've finally written Wollf's Presidential Endorsement. Get on the Bandwagon there, Mister!

We need your support.