Obama sought to place the inflammatory remarks of the Rev. Jeremiah Wright in a broader context, in part by placing them on a continuum with Ferraro's recent remark to the Daily Breeze that Obama is "lucky" to be black.

"To equate what I said with what this racist bigot has said from the pulpit is unbelievable," Ferraro said today. "He gave a very good speech on race relations, but he did not address the fact that this man is up there spewing hatred."
...
Ferraro also said she could not understand why Obama had called out his own white grandmother for using racial stereotypes that had made him cringe.

"I could not believe that," she said. "That's my mother's generation."

I’ve been accused of being a racist more times during this campaign than in all the rest of my political life, combined. I wrote a book supporting Hillary Clinton for President long before Obama got in the race, and count the Clintons as longtime friends.

I have tried, not always perfectly I am sure, to be fair and respectful towards Barack Obama. I have tried to keep my focus on issues and qualifications. You can say I’m wrong – I’m certainly used to saying that - but racist?

Identity politics at it's best. It's sort of like watching the Serbs, Croats and Muslims work things out in their own, peaceful way. 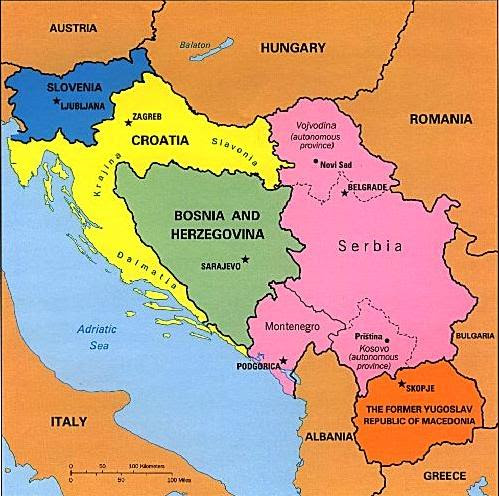 A map of the modern Democratic Party.
Posted by K T Cat at 8:53 AM

At least they don't have heavy weapons at their disposal.

No problems! The Republicans will sell them all the heavy weapons they need at half the price it took to produce them. When they start goiong deep into debt, they'll cut the prices even more.