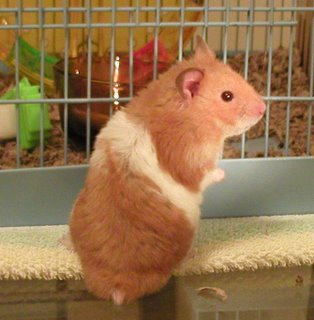 Saints over Eagles. The Eagles lost their top CB, Lito Sheppard, with a dislocated elbow. The Eagles might have been able to beat the Saints with him. Without him, forget it. The Saints will have Joe Horn back and my main man, Marques Colston, in top form. Expect the Saints to beat the Eagles and Drew Brees to throw for more than 300 yards.

Saints over Bears. The Bears simply cannot score enough to keep up. As good as their defense is, it won't be able to stop Reggie Bush and company from putting points on the board.

Ravens over Saints. As much as I love my Saints, I can't see them beating the Ravens. They won't be able to run against the Ravens defense and without a running game to keep them honest, the Ravense defensive line will tee off on Brees.
Posted by Jacob the Syrian Hamster at 12:58 PM