A friend at work got me interested in rockhounding. In San Diego, there aren't many places to find interesting specimens. You need to drive a minimum of 90 minutes into the desert to get to a good place for collecting. I started studying geology as a hobbyist recently to try and figure out just why this was. Thanks to the blogosphere, I have access to experts like our Keeper of the Catacombs. Here's a question for him.

Take a look at two nearby spots where you can collect large scale crystaline minerals. One is Shell Canyon near Ocotillo Wells. The other is Wiley Wells. Here's what they look like in Google Earth. 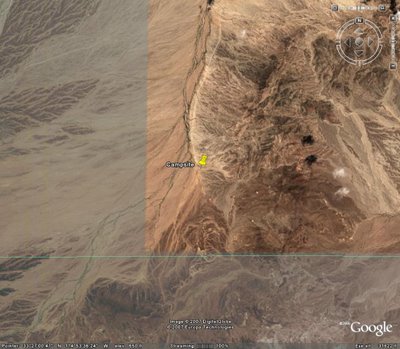 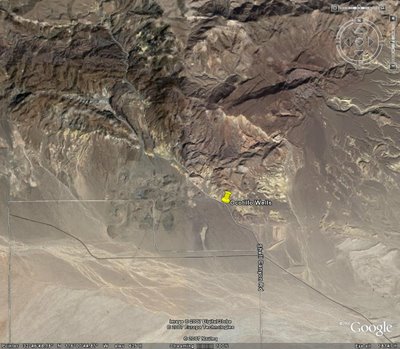 Shell Canyon
They look pretty similar to me. Exposed rocks jutting out over a sedimentary layer. Here are their positions.

What's going on here? Why is it that the crystals are so big here and not in other places? Is this a batholith that has been exposed by erosion? I haven't been to Wiley Wells in person, but in Shell Canyon you can easily find quartz pieces in sizes almost too big to lift.

Since different minerals solidify at different temperatures, my first thought is that here the magma cooled slowly, allowing the quartz to crystalize in huge lumps while the remaining rock remained liquid. Does that make sense?

Ron Schott said...
This comment has been removed by a blog administrator.
4:15 PM

I'm working on a more detailed explanation, but for the moment I just want to address a few points.

The two spots you've highlighted appear superficially similar in terms of their geographic setting - that is to say, they are both outcrops of basement (bedrock) that rises out from under (not over) a sea of more recent sediments. Based solely on the aerial photos, I wouldn't be surprised if the abrupt transition from sedimentary basin to uplifted bedrock mountains was a fault (not necessarily recent) in each area, but I haven't looked at a geologic map yet (and the outcrops are, sadly, too distant to visit for a quick inspection from here in Kansas).

You are right to associate crystal size with cooling conditions of the magma. The most direct correlation that geologists generally make is that large crystals are the result of slow cooling of magma, deep underground, whereas smaller crystals are associated with more rapid cooling of magmas that make it to the surface (lavas) or shallow subsurface. It's the rate of cooling rather than the specific cooling temperature that makes the biggest difference.

In detail, it's a function of the degree of undercooling and the nucleation vs. the growth rates of crystals of individual minerals. The presence of magmatic fluids, such as H2O (water, but not in its familiar liquid form) can also aid in the growth of large crystals.

Because individual plutons within the Peninsular Ranges Batholith were intruded at different times and under different conditions, they will have different compositions and textures (crystal sizes).

Ron (Keeper of the Catacombs)

P.S. Aargh. Blogger doesn't let you edit a comment once its posted. Can you fix that K T?

Fantastic. I'm extracing this into another post. I had to go look up some of the terms you used, but that's the point of this exercise.

Thanks! I can't wait to see the larger version on your blog.

kt i was going to go to shell canyon to hunt for crystals i live in julian im not wasting my time am i ? thank you shari

Shari, I don't think it's a waste of time at all. I recall finding plenty of quartzite there. You'd have to use some tools to shape them into crystals, but it's probably the best place within driving distance for you to find such things. Sadly, San Diego doesn't have the geological basis to find many crystals.