A Hamster Predicts the Super Bowl 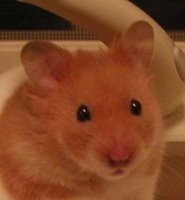 Since I am Marques Colston's unofficial publicist, I thought I would share some inside information I've received on the upcoming NFL playoffs in the form of playoff and Super Bowl predictions. It helps to roll with the right crowd.

Yesterday's games held no surprises. Despite Peyton Manning being off his game, the Chiefs just could not hang with the Colts. No upset there. Tony Romo had the yips something fierece against the Seahawks. It was an exciting game, but no upset. Now comes the hard part.

Patriots over Jets. The Jets have been a heck of a story, but they don't have enough to keep up with the veteran Pats. Expect this one to be over pretty quickly.

Eagles over Giants. As much as I want to see Eli do well, the Giants have been self-destructing all year and chewing on each other in the locker room. You can't do that against the Eagles. A blowout.

Bears over Seahawks. The Seahawks stink. Every game they win is a miracle. The Bears, despite having a mannequin as a QB, will keep the Seahawks to single digit scoring and muddle through to victory.

Eagles over Saints. I'm not hoping for this, I'm just predicting it. The Eagles are the only team in the NFC that can keep up with the Saints on the scoreboard. If the Saints can win this one, they will go on to massacre the Bears and go to their first Super Bowl. 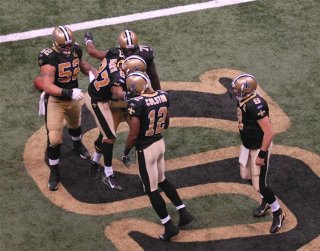 My man gettin' props from his peeps.
(What does that mean, anyway?)
Chargers over Pats. Two well-balanced teams that will play a great game. LaDainian Tomlinson only plays for one of them.

Eagles over Bears. The Bears can't score and the Eagles can. The NFC is pretty bad. The best game of the playoffs will be the Eagles - Saints game.

Ravens over Chargers. The Ravens are designed to beat the Chargers. The Ravens defense will take LaDainian out of the game and Phillip Rivers has the yips just like Tony Romo. Marty Schottenheimer will return to his Cro-Magnon roots and try to run the ball right up the middle with no success.

Ravens over Eagles. This will be an exciting game as Jeff Garcia sees it as his only chance to play in a Super Bowl and will go all out. The Eagles pass defense will let Steve McNair have some fun. In the end, the Eagles just won't be able to get it done.

If you've posted Super Bowl predictions, let me know and I'll link to them here.
Posted by Jacob the Syrian Hamster at 8:12 AM

I only do predictions for the super bowl. :)

Okay I'm not really one for fur, but that picture reminds me why I let the kids keep two hamsters. They're just darn cute. Those eyes . . .

But of course my love of cuteness ended when I saw the holes in my brand new carpet. The rodent had to go at that point :) I know, I'm horribly mean. But the darn thing kept escaping.