Good friend and semi-anonymous commenter Brian had this to say on an earlier post:

(T)he government wanted to extend home ownership through securitizing mortgages, the Republicans wanted less regulation and between the two you end up with mortgage bankers handing out gobs of money to anyone willing to lie about their income. The two ideologies combine to form a perfect storm. Everything went OK until property prices actually started to fall, then the riskier banks were caught with this stuff in their portfolios.

After sifting through the comments on other blogs, it dawned on me that the Law of Unintended Consequences was at play here, too.

When Fannie and Freddie decided to buy up subprime loans, they did it to help po' folk buy homes. However, the mortgage brokers were paid commissions on anyone getting these loans. Consequently, it wasn't just the po' folk getting in way over their heads, it was everyone, rich and poor alike. The next door neighbors of some good friends are losing their house because they got a liar's loan on a house that then fell in value. That house was in a nice part of town, too.

Fannie and Freddie set out to make it easier to borrow money and boy did they ever!

The second thought is this: enough with the politics already! What this all comes down to is the investment companies were too incompetent to manage their businesses. Instead, they blame the Republicans for easing regulations and the Democrats for subsidizing risky borrowers. No matter who did what in DC, shouldn't you be expected to run your own business with thrift and foresight? Essentially what the blamers are saying is that they needed people like Barney Frank to watch over them. Barney can't even run a brothel in his own house and not screw it up! What makes you think he's even vaguely competent when it comes to your business?

If you're relying on the government to put boundaries on your behavior so you don't wreck everything, you're doomed already. 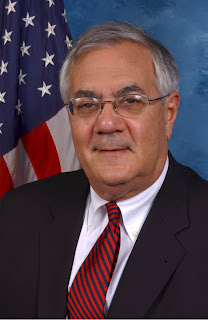 Barney Frank, Chairman of the House Financial Services Committee and also a big, fat idiot.
Posted by K T Cat at 9:28 AM

And so it has come to this: That now the economic health of this nation depends upon that boy lover Barney Frank. The very one who caused this mess.

The man is a complete disgrace and grotesquely immoral. There is no truth in him whatsoever.

What sort of people would put such a creature in office?

I need to call my mortgage guy and find out when I can stop making payments...

The game was rigged to promote a risky shift. We had a tech working for us who bought three or four properties across the US with the thought that she would hang onto them for a while, then sell at a profit. When prices go down though, that Ponzi scheme fails. Since she doesn't have much anyway, why not spin the wheel? She can just let the houses go foreclosure, declare bankruptcy and go on her merry way.

From the initial banks point of view, why not lend her the money, they make cash on the fees charged to originate the loan, then sell of the risk in the secondary market. Ordinarily you would expect the suckers that bought the instruments to eat the loss, but there is so much, that you have this 700 billion dollar bailout; less the banks quit loaning. The thing people don't get is that the 700 Billion is the total purchase price, the actual cost will be far lower; if housing prices go up the government could even make money.