Here's our first report out from Blogworld Expo - the Dave Taylor keynote speech on "How did we get here and where are we going?" Dave Taylor is an author and blogger. One of his three blogs is Ask Dave Taylor. From there you can find the rest of his publications if you so choose. Here are my notes from his talk.

• Blogging is storytelling
• There has always been a bias issue - We only see bias when we disagree with what is being said. He brought up the example of the New York Journal issue by Hearst that dealt with the destruction of the USS Maine and set off the Spanish-American War.
• Blogs are diaries, but diaries are historical records as well. The Diary of Anne Frank is a good example. She didn't write it with the intention of having millions of people read it. It was just a record of her life and yet it has turned into a major historical document.
• People need to have a voice. Making money is a tiny part of blogging, it’s all about making your voice heard. He gave examples of political graffiti from various countries. He then moved on to this blog post about South Africa. People are taking real risks to post their views. He gave an example of a Saudi blogger who was jailed for speaking his mind.
• Blogging is easy to start – it’s a very democratic device to getting your voice heard. It's a very effective communications because it is bidrectional, global and free.
• Blogs prevent the silencing of the past a la George Orwell – "who controls the past controls the future and who controls the present controls the past." More voices means less control. At their core, bloggers are journalists.
• The PR and marketing departments in organizations across the world are losing control of their situation. CNN has recognized this and has developed iReport to bring news from all kinds of people all across the world.
• These days, everyone can have their own media channel and you can’t tell the difference between NYTimes and FilmBuzz (Dave's Twitter feed). That leads you to wonder, how do you trust anything you read?
• The Internet is becoming pervasive – Chrysler is bringing it to cars, Amtrak is bringing it to trains and Row 44 is bringing it to airplanes.
• Spam comments prove the health of the blogosphere – no one would bother spamming a dying industry.
• My favorite quote from Dave - "The revolution won’t be televised because the infinite channels of our new media ARE the revolution."
• All of the 1950s projections of the future were wrong – they showed one-way communications – the Jetsons watching TV.
• The iPhone is changing the whole nature of the computer industry.
• Corporations are learning how to deal with the new world. Level 1 – corporations can use the blogs to send out their point of view. Level 2 – corporations can participate in the conversation. Imagine the world as a big party and you are just one person at the party – you can’t interrupt everyone and demand they come and see you – it’s their party, not yours. Press releases don’t work so well any more. You need to be involved in the conversations about your product. You can't expect people to read your press releases in response to negative blog posts or comments they read on another site. In fact, by many people press releases are seen as spam. The question being answer is this - How do you communicate with a culture that doesn’t want to hear your normal PR broadcasting? 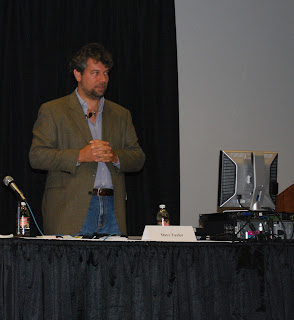 Email ThisBlogThis!Share to TwitterShare to FacebookShare to Pinterest
Labels: blogworld08

my goodness! i never knew my bog had been posted and spoken about like this!