Note to Putin: Angering the West may not Have Been Such a Good Idea

... now that your economy is becoming a train wreck.

Russia moved Wednesday to bolster its increasingly stressed banking sector, as global economic turmoil deepened fears the country could face a crisis similar to the financial collapse of 1998.

Economists also warn that the deepening financial turmoil is likely to dent Russia's red-hot economic performance in the coming months, as financing dries up for companies and banks.

"Russia's economy has entered the crisis phase," warned Mikhail Dmitriev, a prominent economist who advises the government. "Russia has been practically cut off from external financing and we're much more dependent on them than it seems."

Cut off from external financing? Ow! That must hurt. Maybe that invasion of Georgia wasn't such a good idea, particularly when all you sell are raw materials and commodity prices are falling rapidly. Here's a 6-month chart of the Russian stock market. Note how it fell from around 3500 to below 1500 in the last few months. We just had a 500-point drop in the DOW and everyone threw up on their shoes. (As of the writing of this post, we've recovered about 300 points of that loss in less than two days.) The Russians have had the equivalent of a 6000-point drop in the last four months. 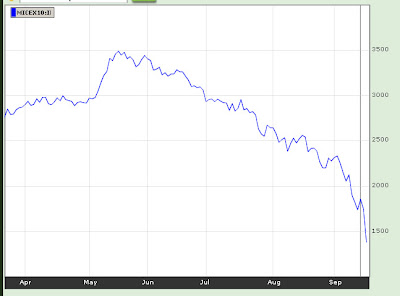 Wheee! It's like a going down a big hill on a roller coaster!
And that, my dear Mr. Putin, is why you need to play nicely with the other countries.
Posted by K T Cat at 10:58 AM