... err, or something like that. Women able to lactate are now able to make big bucks in The Land Where The Infrastructure Shines Like Gold. It turns out their milk powder was tainted by poisonous chemicals and it's making the babies sick.

As Chinese parents panic about the tainted milk -- which authorities now admit began in late 2007 -- that has killed four and sickened more than 53,000 children, the fallout is breathing new life into an ancient profession. Wages for Chinese wet nurses, who post online ads and sign up at housework agencies around the country, have doubled since the milk crisis began on Sept. 12. They now run as high as 18,000 yuan a month. 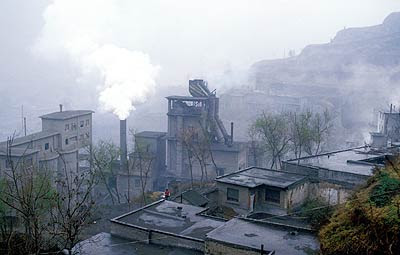 God bless the Chinese. Their amazingly wonderful infrastructure has managed to create high-paying, green jobs that raise women out of poverty. It's a triple play!
Posted by K T Cat at 6:26 AM

I see you changed your tag line.

Yeah, I hadn't done the World of Good in so long that I felt guilty.

I led a delegation of 32 women to China in 1998. My delegation comprised of women who worked in the construction industry - middle or upper management, owners - not trades people. We met with our counterparts and found out - surprisingly enough - Chinese women got paid the same as men who performed the same work. I know it's a little off-topic but thought someone might be interested in this tidbit - or not. LOL

Even better - TA is urging Ben and Jerry's to use Breast Milk in their ice cream.PE Imagine the Production line... I find it hard to believe this is an AP link.

The Virginia-based nonprofit group sent a letter to company co-founders Ben Cohen and Jerry Greenfield on Tuesday asking them to use human breast milk instead of cow's milk in their products.

PETA said the health of consumers and cows would benefit from the switch.

Ben & Jerry's spokesman Rob Michalak said the company applauds PETA's creative approach to bring attention to an issue, but believes that a mother's milk is best used by a child.

Information from: The Times Argus, http://www.timesargus.com/