As you might expect, given the state of the markets, this session very quickly devolved into a discussion of the current banking crisis. It was tremendously enlightening and the discussion with the audience was terrific. To deal with the main topic of the session, the quick answer is that financial blogs do not affect the market. A description of the original intent of this session can be found here.

Now on to the good stuff.

The moderator of the panel was Barry Graubart who blogs at Content Matters. The panel consisted of

Paul Kedrosky from the Infectious Greed blog,
James Ledbetter who writes on economic topics for Slate,
Howard Lindzon who writes his own blog and
Felix Salmon from the Market Movers blog.

Here's the discussion, or at least as much as I could transcribe. It was pretty fast and furious.

• Paul - He believes that the new RTC is going to cost between 1-2 trillion dollars.
• Felix - The temporary ban on short selling is a terrible idea.
• Howard - The market was on its way to a crash and this was the only way to prevent something horrific. Wiping out the short sellers hurt us. The stock market is like a giant brain and this was a shock to the system.
• James – He thinks this will get political very quickly. This was a triumph for socialism. He likes the short selling ban, but only so long as we ban buying stocks as well. (That was sarcastic.)
• Felix – There is unanimity in the financial blogosphere about what has happened – they are all against the ban on short selling.
• Paul – The US economy and markets are like a supertanker and everyone else is a normal boat. When we move a little bit, everyone else gets thrown all over the place.
• Howard – The next month is going to be very interesting. He likes to look at the stocks outside of the direct hit – he was looking at the consumer stocks as the banks got killed.
• My own note - None of them were taking any responsibility for their profession – those of us out here in the rest of the world weren't the ones who concealed the lousy debt inside of bonds.
• Felix – Crashes are worse when there is no short selling.
• Paul – Everyone knew the dot com bubble was going to burst, but no one could time it. No one wants to be the one who jumped off before the top was hit. There was no reason to get out of the real estate market so long as it was going up. Bloggers can be negative as early as they want because they have so little at stake. 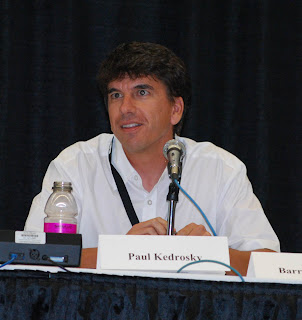 Paul Kedrosky
• Felix – He thought it’s easy to overstate the degree to which they knew it was going to happen. They didn’t know how bad the default risk was.
• Paul came up with an example of someone who saw this all coming.
• James – He doesn’t think the bloggers deserve that much credit for calling this. People didn’t forsee the perfect storm of subprime loans and the drop in real estate prices.
• Felix did not feel the blogs play much of a role in perpetuating rumors. He believes the bloggers are more skeptical by nature.
• Paul said there is an amazing amount of gossip that occurs on the trading floor and he wished the bloggers could make this more transparent.
• James believed that the problem was group think. My note: That’s a problem everywhere from the NFL to the Pentagon to the MSM. It’s human nature to not want to stick out while everyone is agitating for one thing and you believe in something else.
• Howard is not in blogging to make money, he’s in it to build his brand equity of himself.
• Felix – The vast majority of the people on Wall Street don’t read blogs and many of them don’t read the Internet. For the most part, they’re doing their jobs. Email is the way you reach the big boys on Wall Street. Most financial bloggers have a hedge fund or a service to sell, they aren’t blogging to make money on the blog.
• They all saw the market going lower.
• Paul – The blogs have unleashed the voices of very narrowly focused experts. This is one of the great merits of the financial blogosphere. Calculated Risk is the blog they all used as a good example of it.
• In group blogs you usually want to read just one of them, you don’t want to read the rest.
• Howard really likes Twitter as a tool because there is some sort of reputation analysis because you can see the number of people following any one particular twitterer. In contrast, you don’t know who or what is behind a Reuters story.
• Howard gave concrete examples of just why Gary Vaynerchuk was right. He wants people to come into the conversation and add content to it.
• A real estate professional in the audience said that in his circle, everyone from the bloggers to the mortgage brokers to the realtors all knew the growth was crazy, but the media did not cover it. It wasn’t until the bubble burst that they paid attention. The panel agreed that the same thing is true in the financial blogosphere.
• Howard – He runs a hedge fund and his management of the hedge fund is 50 times better now that he blogs and reads the blogs. All of that expertise at his fingertips as a community makes him smarter.
• Paul has examples of hedge fund managers who write to him about things he has written and claim he has affected the decisions they make. He thinks the blogs have quite a bit of impact. Me: This does not seem to affect the MSM.
• Commenter from the audience - The ban on short selling was put in place so that they could have 30 days to move all the bad bank stocks into the RTC. The bank stocks have been protected because their tendrils are all through the economy. GM can be walled off, but the banks can’t be. My note: This last bit of information may have been the best tidbit of information I gained from all of Blogworld. It was wonderfully succinct summation of the problem and the solution. 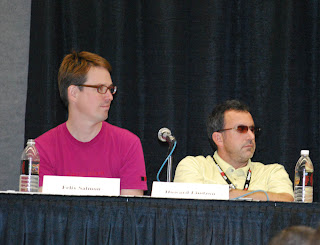