On Frozen Peas and Unicorns

While on Maui this last week, we've spent quite a bit of time snorkeling at one of my favorite spots on the whole planet, Ulua Beach. Most days, we've brought a small bag of frozen peas to feed the fish. As soon as you get out over the reef, the Unicornfish all recognize the bag and swarm over to you hoping for a treat. If they could make noise, they'd all be crying for noms like our Maximum Leader does when she smells an open can of tuna. 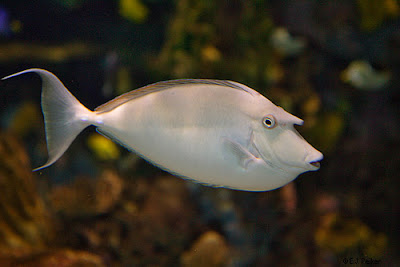 There would be 20-30 of these guys, fat and sassy, milling around you waiting for the shower of peas.
The Unicornfish were at the top strata of the water and always managed to get the peas first, but with a sufficiently large spray of them, plenty of peas would make it down to the Triggerfish and others in the middle strata. At one spot, down on the bottom was a huge Ornate Wrasse (I think that's what it was) that should have had a little light on it's head and been making vacuum cleaner sounds as it sucked up all the peas that fell to it.

Before we left on this trip, I considered getting an underwater camera or a waterproof case for the ones we had. The cameras were a bit too expensive and the cases came with sufficient user reviews claiming leakage and camera destruction to prevent me from buying them. Maybe next time.
Posted by K T Cat at 12:28 PM

Definitely more photogenic than the fish they have at the Cedar Point amusement park in Ohio. There, they have a bridge over a small river, with a coin-operated fish-food dispenser (the food looks like kitty kibble). You get a handful for a quarter, and when you throw it into the river these huge carp come to the surface in a seething mass, sticking their rubbery lips up out of the water and crawling over each other in their eagerness to get the kibble. There are stories of people who fell in, and who were covered by little welts from all the carp sucking on them with those big carp lips.

Meanwhile, if you throw the kibble further to where the willow trees shade the water, these monster catfish will poke up their heads like grouchy, whiskered old men and snatch them up.