So a while back I posted about how I thought that successful missionaries had to come from technologically superior societies. That still didn't convince me that you could construct a winning sales pitch to cause groups of people to abandon their longstanding culture in favor of what you were selling. I was muddling about with this when I asked my wife what she thought.

"How would you sell the thing? If you were, say, Marquette trying to sell Catholicism to the American Indians, how would you do it?"

She looked at me in surprise at my puzzlement and simply said, "You would live your faith."

Hmmm. That still didn't make sense to me, the analytical marketing type. Yes, yes, I'm sure you would live your faith, but how would you get them to buy your product, I wondered, still working out how you would perform market segmentation and sell what the customer wanted to buy. Then this last Sunday, I went to Mass at St. Theresa's Catholic Church on Maui and afterwards found a book on Father Damien. The answer was so clear.

You would live your faith, you bonehead.

The dude was a Belgian who came to Hawaii, became a priest, worked on the big island for a while and then moved to Molokai to minister to the lepers. "Minister to the lepers" doesn't capture what he really did. What he did was place is body completely in the service of others in an attempt to live as Christ taught. He lived his faith. 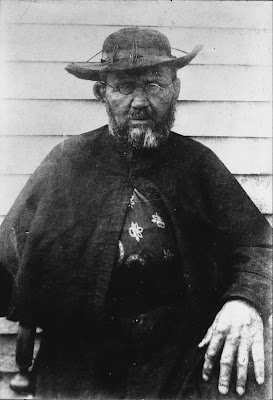 Father Damien had lived in Kalawao 12 years when it was confirmed that he had contracted Hansen’s disease. Although the disease is not highly contagious, Damien had not been careful about hygiene. Over the years he had done nothing to separate himself from his people. He dipped his fingers in the poi bowl shared with other patients. He shared his pipe.

He contracted the disease because he refused to treat the lepers like lepers. The disease separated them socially from the rest of humanity and that human distance must have been pretty painful. Father Damien crossed that distance to help them feel loved and accepted despite their disease. The dude didn't stride into town with bandoleros of antibiotics strapped across his chest and the latest medical gear in holsters at his hips, he lived his faith.

I know this is a little off-topic, but great holiness like that shown by Fr Damien really is available to everyone, even to the "least" among us. To illustrate, my favorite saint is St Joseph of Cupertino (aka "the Gaper"), patron saint of people with mental limitations. He was kicked out of several monasteries and seminaries for rank stupidity. It is said that during his preparations for the diaconate, he struggled to learn but one small part of the Bible and prayed his examiners would ask him questions about that. And they did.