There's a decent article in the WaPo today discussing how a financially destitute and secular Europe is rethinking the whole EU concept. Whether that's true or not, one thing in the article jumped out at me.

The renationalization of European politics is a product, first and foremost, of generational change. For Europeans who came of age during World War II or the Cold War, the E.U. is an escape route from a bloody past. Not so for younger Europeans: A recent poll revealed that French citizens over 55 are almost twice as likely to see the E.U. as a guarantee of peace as those under 36.

The article itself doesn't mention how Europe is no longer Christian, but this little tidbit shows one way that matters. Without a common faith, historical events aren't enough to bind people together. In time, the generation that was affected by, say, the Franco-Prussian War of 1870 dies off and the following ones are no longer driven by its memory.

By contrast, faith lives on almost unchanged from generation to generation. Without that as a binding force, you're left with ... what? What lasts across the decades to carry on a culture with any kind of force? It seems to me that in its absence, you're left with entropic decay where the binding elements in society are the means by which appetites can be satisfied with minimal effort. I'm not sure I agree with the article, but it's possible that the effort of maintaining the EU may well become too much trouble in exchange for preventing disasters that no one can remember.

History doesn't seem to have much staying power. 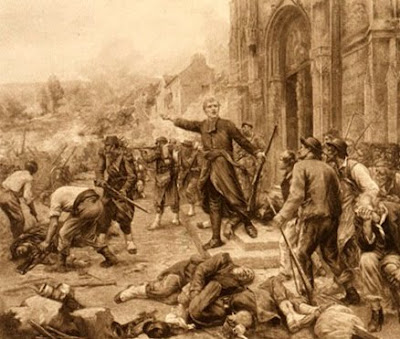 Let us never forget, err, whichever battle this was!
Update: I can hear the argument being made that a common faith didn't seem to stop the wars, but that's not my point. Powerful, ambitious, amoral men still ordered their citizens to kill other people whether they were Catholics (French), Protestants (English) or Atheists (Nazis and Communists). What's interesting to me is that the EU was constructed to bring a permanent peace to Europe, but the desire for permanent peace burns brightly only so long as people remember the horrors of war. As that dims with fading memory as all of history does, it falls away as a driving force, leaving you with ... what?
Posted by K T Cat at 6:53 AM

Don't you think it is more due to resentment over having to bailout the governments of the poorer EU members? I'd want to know what the younger members of the Northern European members thing about the other No. EU member states. For instance didn't France just rejoin NATO. How do the younger French feel about being allied with the NATO states?

Those are good questions, but they kind of reinforce my point. As time goes on, direct economic effects outweigh the fading memory of war.