Darwinism and the Mosque

This article by James Taranto in the WSJ is loaded with tiny tidbits to analyze and dissect. It's all about how the media and the left hold most Americans in contempt. Here's one bit in particular that caught my eye.

Many Americans (and politicians who [sic] the polls) don't want a mosque at Manhattan's Ground Zero. . . .

Where is all this coming from?

It's called fear. When people are deeply anxious about holding on to their homes, their jobs, and their savings, they look for someone to blame. And all too often they find it in "the other"--in people who look or act differently, who come from foreign lands, who have what seem to be strange religions, who cross our borders illegally...

So if some Americans are afraid of people "who have what seem to be strange religions," it must be a totally irrational reaction to "economic insecurity." It couldn't possibly have anything to do with an act of mass murder committed in the name of the religion in question.

And Reich doesn't just fail to see the obvious. He dehumanizes his fellow Americans by treating their values, feelings and opinions as no more than reflexive reactions to material conditions.

Darwinism (and scientific atheism in general) tries to explain the world as a series of logical consequences of previous actions. There is no deeper meaning to anything, everything you see is the product of evolution and scientifically explainable actions. That mental model for explaining the unknown is the same that's being applied here.

The implicit explanation goes thusly: "There is no deeper meaning behind the actions of people who disagree with me, their positions can all be explained away through simple sociological laws and precepts. Economic uncertainty breeds fear. It's a well-known fact. The people that don't want the mosque are simply too ignorant to understand how their views are the products of evolution in a socio-economic sense."

Herein lies the arrogance of all such thinking - the author, in this case Robert Reich, believes himself immune from such effects. He thinks he lives outside the laboratory of life, an observer of the poor creatures trapped within. He's not just a better person than you, he is actually different from you. Where you cannot perceive the evolutionary processes at work upon your worldview and are therefore incapable of preventing your bigotries from flourishing, he lives in a different reality entirely where such forces do not work.

In that way, Robert Reich sees himself as God.

And that's the position all such people hold. Their views are all the product of rational thought, unencumbered by the mundane forces that drive you - greed, lust, fear, vanity. This thought process leads in one direction - the more these people manage your lives, the better off you'll be.

Unless they happen to be wrong and they really are driven by the same forces as you. 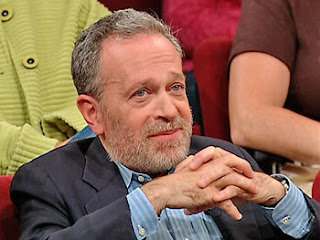 See how calmly he listens to your ravings? Truly, he is a Great Man. Bow ye down and worship him and pray that he deigns to guide you.
Posted by K T Cat at 6:56 AM

Both you and Reich are quite correct. Reich is "the other". Reich and his ilk are the people we truly do fear.

Pity the poor relativist. Always sawing off the branch he's sitting on.

Upon due consideration, I have to say that I'm not quite sure what it is you are going on about, starting right about the time that you dragged "Darwinism" into it.

Isn't it enough to say that (A) Reich thought that only part of the problem was actually the whole problem, and (B) You think Reich is an arrogant ass? Those are the only points I was able to extract from your post, the rest of it seemed to be a lot of sound and fury but not signifying much.

Yeah, it probably wasn't a great chunk of logic there. I just saw a parallel in the mechanics of the two arguments - "I am above the whole thing and so I see it clearly unlike you little people."