Thanks to Tim and some conversations I've had at work, I've got a simple and inexpensive plan to kill the scale that is infesting Momma Daisy (MD).

Scale is difficult to kill with poisons. It takes many treatments because you can't coat the entire surface area of the plant, particularly ones that are as densely grown as MD. That suggested to me that we needed to do something more global. My first thought was a hypobaric chamber where we would pump out the air and suffocate the bugs. Tim suggested an anoxic chamber instead where we would remove the oxygen. Friends at work suggested placing a MD in a container and performing the vinegar and baking soda routine within that container. The resulting CO2, being heavier than O2, would displace the oxygen and create a suffocating layer of CO2 for the bugs.

That's a dramatic (and fun!) way to do it, but I think I've got a better one. If we place MD in a big container, add a lit candle to it and then cover it, the candle will consume the O2, replace it with CO and CO2 and similarly suffocate the bugs. Two questions remain: what levels of O2 and CO2 will be deadly to the bugs and how long will it take?

Tim gave us a link to this site that gives us details on how to kill various insects with suffocation.

The results showed that the time required to kill 100% of the insects varied among species and even among the developmental stages of a given species. For most insects tested, exposures of less than 72 hours were required to insure complete kill. Certain stages, such as eggs of cigarette beetles, may require up to 8-day exposures to insure complete kill. Preliminary tests indicated that the addition of CO2 to the nitrogen slightly decreased the exposure time required to kill the insects. However, if increased temperatures or decreased relative humidities could be tolerated by the objects, they would probably have a much greater effect than using CO2 and N2 mixtures in reducing exposure times.

That leads us to ask, "At what O2 level will a candle go out?" Here, we found some information from a spelunking site.

When caving in the Arbuckle Mountains, the BIC (lighter) was the air quality instrument of choice though at the time, no one knew how reliable or accurate it was at the time.

During the course of the state park project, we became curious at what oxygen levels the lighter would start reacting. Using the instruments we set up a number of controlled experiments and verified them with a number of repetitions over several years with different brands.

The lighter will start reacting at 19.5% oxygen. The flame changes color and a small gap will begin to be noticeable between the flame and the jet. At 18% oxygen, the flame will burn about 1 inch above the jet. At 17% oxygen, the lighter goes out and can not be relit. As mentioned earlier, these measurements were very repeatable and could be verified by anyone with the instruments to do so.

It sounds to me like the candle will not consume sufficient oxygen to kill the bugs. Still, I think it's worth an experiment since the idea is so easy and inexpensive. 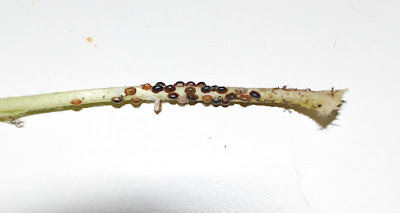 I'd lean to high explosives myself, altough the collateral damage to Mother Daisy might not be at acceptable levels.

I have killed the buggers with nicotine solution.....might try that?

You need to consider MD's metabolism as well. She will consume the CO2 and give off oxygen. So any long term process will need to take that into account. I'm wondering what concentration of CO2 was required for the 3 day kill? generally speaking, very high concentrations of CO2 are very toxic to oxygen breathers (just google "Lake Nyos" to see what I mean).

Ivyan, I've heard that objection several times, but in the back of my head, I recall some studies showing that individual plants do not create significant amounts of oxygen quickly. If it was a vat of algae, I'd be concerned, but MD doesn't seem to have the density of photosynthesizable plant material necessary for lots of O2 produciton.

Additionally, the O2 will rise above the layer of CO2. Your idea about CO2 poisoning as the actual primary kill mechanism vs. O2 depletion jives with the other things I read, but didn't post.

Okey-Dokey....all these Scientist friends and ol' Wollf has an idear you hadn't heard of?

Makes my head swell all up....

It's easy; simply combine about 1/2 ounce of tobacco (empty out some Camels), per quart of water, soak for one day at room temperature and strain the resultant tea.

This ain't Momma's sweet tea....try to avoid getting it on you.

Nicotine sprays are useful on all insects, but are usually used for aphids and your rusty buggies.

Don't use nicotine sulfate, that's a Science word, on plants you intend to eat. But then, you'd be almost a cannibal to eat Momma Daisy.

I'd still consider the explosives......

Word Verification "BIOXEST", like what those bugs are gonna be.