What Will It Look Like After He's Fixed It?

Apparently, the public is willing to wait for their tax cuts while Obama fixes the economy.

WASHINGTON (AP) — People want the tax cuts promised during the presidential campaign, but may be willing to wait while President-elect Obama takes on the larger issue of fixing the economy.

This sounds like a very complicated job, one that is not understandable by us average folks. I think we should all take off work and sit quietly in our homes until he's got it fixed. We wouldn't want to get in his way as he goes around fixing things, you know. 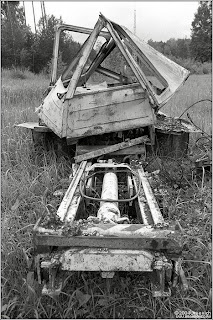 A product of the last government who tried to "fix" their economy.
If you want a foretaste of what it will look like once the press and the politicians finish convincing all of us to let the government fix the economy, take a look at this.
Posted by K T Cat at 9:48 AM

You know, this fascination that both parties have with "tax cuts" and "the other guy is going to raise your taxes, but I am going to lower them!" is making me a bit crazy. Ok, so raising taxes will tend to suppress economic growth, but lowering taxes will tend to increase the federal deficit, so which poison do they want?.

Hey, here's a novel thought: why don't we just *let the taxes stay the same!* And then, give businesses some assurance that the tax rate will *keep* staying the same for some time, so that they can, oh, I don't know, *plan intelligently for the future*, maybe? And then actually, say, work out how to reduce government expenditures so that they come into line with the taxes collected?

He said your taxes will be lower under his plan than they were under Reagan.

Roll back the Bush tax cuts - put millions BACK ON the tax rolls....

(obangido - must be related to Obama's tax plan)
(rodiesti - twice)

Thanks for the link, KT! That's "change we can believe in."