Now That You've got it, What do you do With It?

Somali pirates have captured a supertanker.

DUBAI -- The U.S. Navy said pirates commandeered a Saudi-owned supertanker bearing more than $100 million worth of crude a few hundred miles off the Kenyan coast, an attack that sharply increases the stakes in an effort by governments and militaries to protect the world's energy-supply lines.

U.S. Navy officials said the hijacking was unprecedented for its distance from shore and the size of its target -- a ship about the length of a U.S. aircraft carrier. The attack appears also to be the first significant disruption of crude shipments in the region by pirates.

The thing is massive, the size of an aircraft carrier. The heist seems to be phenomenally stupid to me. It's like a gang of robbers sneaking into a Beverly Hills mansion and choosing to make off with the 20' tall statue of the Winged Victory of Samothrace instead of the jewelry in the bedroom.

I can only see two alternatives and that is blackmail or kidnapping. They must be planning on holding it for ransom and threatening to sink the thing somewhere if they don't get their money. It's not like they can drive it into Mombasa and sell the oil. I doubt they've got anyone on board who can pilot the beast.

Alternatively, they might just kidnap the crew and hold them for ransom. That's much more typical for these creeps. If that's the case, will the tanker be set adrift? That could prove interesting. 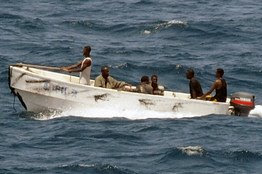 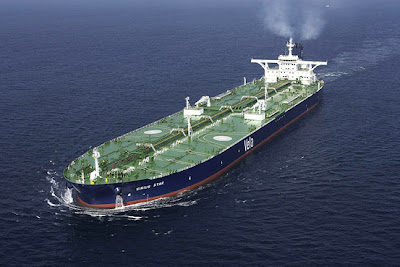 What, you don't think that they will turn it into a mobile pirate base, providing fuel to their marauder bands on jet-skis, and steal food from other survivors when all the Earth's land surface gets inundated by the ice caps melting?

Yeah, I didn't believe it in "Waterworld", either. I think "ransom" is more what they had in mind. Maybe along with threats of causing a major oil spill in a sensitive area.

So why don't these things have a security team on them? A few RPGs and a 50 cal ought to discourage them.

Kelly, a few freighters have fought off the pirates successfully. However, I would bet that most crews aren't interested in dying for the company.

Tim, I've got a follow-on post that begins to clear up the situation.

Why the fascination with the size of the ship? As if a supertanker requires a whole lot more crew than a regular tanker.

Why hijack? Think of the rewards... you're a total scum-of-the-earth in The-Scum-of-the-Earth, and your rich buddies with the john boat invite you on a ride. What's to lose? The worst that can happen* is you only end up with a handful of copper wire stripped from the crew's quarters, and you're suddenly the third-richest person in Scum-of-the-Earth.

Why isn't every vessel in the area carrying a security team? Probably strict gun control measures in the source and destination ports. The Saudi government doesn't like anybody other than itself to be armed.

* You think that death might be worse. That's because you don't live in Scum-of-the-Earth where death is a welcome escape.

I think the size matters because of the message it sends. You can capture all the middling freighters you want, but when you start picking off supertankers, I'd think some line would get crossed.

On the other hand, NATO and the US have wandered off and are looking elsewhere ...

As for Somalia, point taken.