The GM Bailout is the Worst of all Worlds

Charles Krauthammer has a great piece on the GM bailout proposed by Barack Obama and the Democrats in Congress.

The point of the Democratic bailout is to protect the unions by preventing this kind of restructuring. Which will guarantee the continued failure of these companies, but now they will burn tens of billions of taxpayer dollars. It's the ultimate in lemon socialism.

Democrats are suggesting, however, an even more ambitious reason to nationalize. Once the government owns Detroit, it can remake it. The euphemism here is "retool" Detroit to make cars for the coming green economy.

Liberals have always wanted the auto companies to produce the kind of cars they insist everyone should drive: small, light, green and cute. Now they will have the power to do it.

This is the worst of all worlds - it is Soviet central planning for domestic industries while allowing endless competition from foreign companies that have no such restrictions. If we go through with this, Ford and GM will be managed by Federal political appointees and will produce what Obama thinks we ought to want. Toyota and Nissan will produce what we do want. Because there will be no labor renegotiations from bankruptcy, GM and Ford will continue to overpay for labor.

Higher costs, cars designed by bureaucrats and competition from true professionals all while the government feeds GM and Ford an endless stream of money from the taxpayers. Hooray! 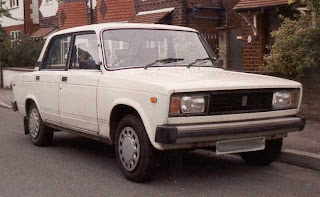 The Lada. The kind of car you should be driving instead of that dreadful Nissan Altima.
Posted by K T Cat at 4:36 PM

Obama and his kind want you to drive a hybrid Trabant.

Or maybe one of these.

Ya, make fun of the Lada, but if you roll it into a ditch all you need to do is roll it back on its tires and start it up! ;)

It's closer to home than the Soviet Union.

Look at the once proud British Car Industry. Bad Mangement and overbearing Unions dragged it down. Then the government came in to save the day.

You can see all the Rovers, Triumphs, MGs, Sunbeams, Worsely, Riley, etc. shows you how well they did.

There are some interesting "American" cars. I'm not likely to buy any of them.