Lots of conservative bloggers are going on and on about yesterday's election being historic and how there's a silver lining in the loss because it shows how broad-minded America is and how they pray for Obama's success and blah blah blah.

There will be none of that here. Just where people are getting their hope from is beyond me. We just elected Robert Mugabe, plain and simple. If you think he's going to lose any more elections, you're high on weed. When you can take money from anonymous contributors in untold amounts, have thugs outside of some polling stations, get the press to investigate your opponents like they were the gestapo and get your supporters to vote multiple times all when you're not the incumbent, imagine what you can do when you are. 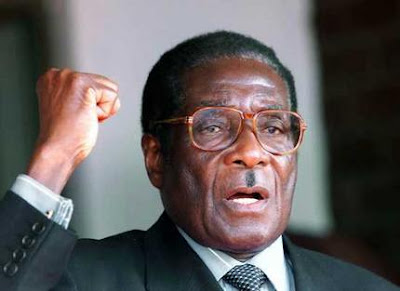 None of that with me, either, KT.

This is the most corrupt group of people we have ever yet seen.

You have stated the case exactly.

* The Dear Leader has not demonstrated any ability to actually get anything done. The community he "organized" is still a southside sh*thole and he has zero record of accomplishments as a legislator.

* Today's WSJ lead editorial is about The Dear Leader's biggest opposition coming from the entrenched democratic congressmen who value their own agendas over anything or anybody else.

(and the Onion has a great video on the masses of zombie-like Obama supporters who can't cope with life after campaign. The Onion suggests that an evil person with some vague platitudes could recruit that zombie army for his own evil purposes)

KT, I don't doubt the potential Mugabe-like results of an Obama presidency. However... to paraphrase a wise feline who commented at another blog of insignificant note, we witnessed history in the peaceful transfer of power to a man who very well may have been in chains 150 years ago.

Acknowlegement of this accomplishment of our Democracy, as did Senator McCain and President Bush in the most gracious of terms, is not acknowlegement of capitulation or of defeat, per se.

A simple operational pause to regroup and recognize this lost battle should not be construed as giving up on the greater cause and not "girding our loins" for the War ahead.

Dean, the silver lining is indeed that we elected a black man and had a peaceful transition of power. Hooray for us!

Unfortunately, the overwhelming evidence from the campaign and his life is that he has zero scruples and dictatorial tendencies. As soon as the financial crisis hit, the election was over and he had won. There was no reason for all of the fraud and larceny, but he did it any way, in an amount that hasn't been seen in at least a hundred years.

I don't actually have a comment, but couldn't resist the lolcat captcha: "isfetsor"...