Thanks to the Great Powers Politics blog, we've discovered a live piracy map. Here's a closeup on the Somali pirates' oparea. 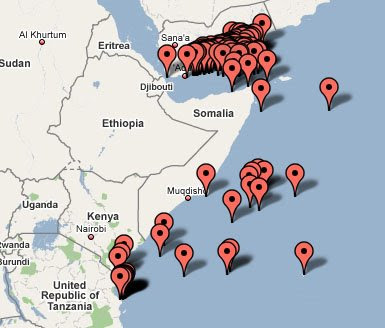 Most attacks have come up north in the Gulf of Aden. The MV Sirius Star was nabbed way down south, off the coast of Kenya.

It's a massive area to have to patrol and none of the local navies have enough ships to monitor the whole place, looking for tiny fishing boats with pirates. Most of the fishing boats in the area do not have pirates and short of invoking the Roman Option, you can't just go down there and sink everything.

Having said that, the Great Powers Politics post linked above has this tidbit.

(A)long with the Indian Navy, the US and NATO are in charge of patrolling the Gulf of Aden, Horn of Africa, Indian Ocean, and other near by waterways where the pirates are most active, but their mandate is too weak. The US has the most powerful blue water navy in the world by far, yet it does not have legitimate rights to police pirates unless they are in the act of committing a crime.

We play by one set of rules, they play by another. The Great Powers post goes on to say this.

(T)he root of the problem is a lack of opportunity in the state of Somalia. Young men who have chosen the life of a pirate need to have other more legitimate options at making a living.

Here's where we part company. The US doesn't have to care what the root cause is. As we are discovering in the financial world, we've spent everything we have and much of our future wealth dealing with root causes that are actually someone else's problem. No one else is concerned with our root causes, so it's stupidity to be concerned with theirs.

The Roman Option was used by the Romans because it was cost effective and they didn't worry about root causes. Their response to annoyances like this was, "Cut it out or we'll kill you all." The Romans were experts at killing people and smashing things. So are we. We're about to blow through $1T in budget deficits in FY09. Efficiency in dealing with things like this had better start to matter.
Posted by K T Cat at 6:22 AM

Check this out - Who's funding the pirates?

I read it. I think the linkages are pretty tenuous. Yes, you have to have some bankers complicit in this somewhere, but claiming that they're "behind" it is a bit of a stretch for me. First off, it seems to assume that the pirates are a monolithic entity, which I doubt.

Second, the amount of money we're talking about here is chump change for the folks in Dubai. I would doubt that they would imperil whole banks for a few lousy millions.

Another thought. "Who is funding the pirates" is in itself a silly question. They are using stolen, old fishing boats and junky little speed boats. Their weapons are AK-47s and RPGs. You hardly need a banker in Dubai for that. If they're being funded by the bankers in Dubai, then they need to look for a better banker.

Hi, it's Pat Frost from Great Power Politics. Though we are in much agreement, I do think root causes of the Somali pirate situation matters. You don't hear about Iranian pirates, Danish pirates, or Indonesian pirates, you hear about Somalia pirates. Somalia is failed state with a capital F and some of its citizens have chosen this career because they think its best chance for making a good living. Now, let me be clear that I do not have sympathy for these criminals, they should be punished for the actions, including punishments handed down by US Navy combat measures, but we cannot just ignore why these pirates come from where they come from.

KT,
A smart naval blogger argues that we shouldn't worry about the Somali pirates on the theory that the enemy of my enemy is my friend.

Here's another look at the situation.