Pirates Have Rights, Too!

... maybe we should even allow them to marry each other. Following the siezure of the MV Sirius Star, an article on the siezure of an Iranian grain ship leads to this bit of information.

Analysts said, however, that the seizure of the Sirius Star exposed the use of foreign warships as “a sticking plaster” that would not solve the problem. “Maritime security operations in that area are addressing the symptoms not the causes,” said Jason Alderwick, a maritime defence analyst at the International Institute for Strategic Studies*.

Roger Middleton, a Horn of Africa specialist* at the Chatham House think-tank, said that the capture was a crucial escalation. “Now that they have shown they are able to seize an enormous ship like this, it is beyond a military solution. You won’t fix this without a political solution.”

I love it. For the pirates, the only solution is military. For us, it isn't. It's like we live in two different realities. For them, a rocket-propelled grenade launcher is their tool of choice. For us, it's a briefcase.

Operations undertaken by the coalition fleet are fraught with legal difficulties, ranging from restrictive rules of engagement to rights of habeas corpus, as the British Navy discovered when it detained eight pirates after a shootout last week. Yesterday the detainees were passed on to Kenya, where efforts to prosecute them will be closely watched for precedent.

Well, that tears it. We need to increase funding for international law experts! After all, the US has a proud history of engaging in courtroom battles with lawless states.

In May, 1801, the United States refused to succumb to the increasing demands of the Pacha of Tripoli; in return, the Pacha declared war against the States. While Tripoli was not a strong power and little effort was necessary to watch and blockade it, the fear was that the other Barbary powers would join against the United States. The United States sent naval squadrons into the Mediterranean under the slogan of "Millions for defense, but not one cent for tribute!" Under the leadership of Commodores Richard Dale and Edward Preble, the Navy blockaded the enemy coast, bombarded his shore fortresses, and engaged in close, bitterly contested gunboat actions.

On 16 February 1804 LT Stephen Decatur led 74 volunteers into Tripoli harbor to burn the captured American frigate The Philadelphia. British Admiral Lord Nelson called the raid "the most daring act of the age".

See? That's the peaceful, enlightened, political solution to the problem. Err, or something like that. 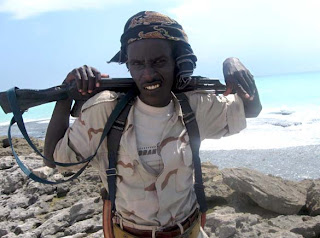 We need to address root causes. The root cause here is this guy has an AK-47 and he wants to take your money.
* Jason Alderwick and Roger Middleton later had to change their trousers due to unseemly moisture in certain areas. In a joint press conference, they denied reports that they still wet their beds.
Posted by K T Cat at 5:16 AM

I wonder if the various naval forces in the area have gotten so frustrated with the restrictions put on them, that they are basically taking a "hands off" approach until things get bad enough that they are given clear orders to go in and shoot all the pirates. If I was a naval commander, that's probably what I would do.

That's actually kind of what happened with the Barbary Pirates, by the way. The US actually paid them tribute for a time, until they got too pushy and we finally said "enough is enough" and built a navy to blow them out of the water.

Tim, my bet is that the US and British navies have had enough of carrying the load for everyone else. Their lack of response indicates to me that they're waiting for the Saudis and others to pay some of the operational costs of patrolling the sea lanes.

Other than the Indians, there aren't any navies who can do the job, so I doubt they're waiting for someone else to show up. I think it's all about money for gasoline and bullets.

I wonder if they are going on the belief that tribute will be cheaper than paying for the navy to patrol. Of course history shows that this is a short term solution.

I actually like the idea of blowing up the ship to take away their object to ransom.

There was an interesting report that explained why the pirates fleets were created. Their original purpose was to raid the Chinese fishing fleet who was seen as infringing on their fishing rights.