Obama Will be Turning off the Lights all by Himself

Well, this won't take long. There's a part of Atlas Shrugged that deals with the loss of electrical power because the system breaks down as the productive people bail out of society. If elected, Obama will short circuit the whole process and turn the lights out himself.

What I’ve said is that we would put a cap and trade system in place that is as aggressive, if not more aggressive, than anybody else’s out there ...

So if somebody wants to build a coal-powered plant, they can; it’s just that it will bankrupt them because they’re going to be charged a huge sum for all that greenhouse gas that’s being emitted.

Do not pass go, do not redistribute $200, go directly to blackouts. 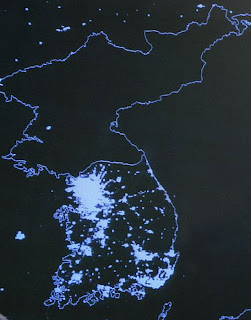 A satellite image of the US and Mexico at night after Obama is elected. For those of you who recently graduated from public school, the US is the one on top.
Posted by K T Cat at 6:37 AM

On the other hand, with all the light pollution gone it will be a golden era for astronomy.

Who's taking bets on the market reaction Wednesday?

The best op-ed bits I've seen so far are about the reality setting in... all those who vote for the messiah to magically turn their lives around will find they're still fat, stupid, and unemployable, and soon will have no job. Any job that can be outsourced will be, and the rest will scale back as far as possible.

But there's always a future as a govvie in the department of peace, enforcing harmony and love at the point of a gun (a government gun; civilians can't be trusted with them).

"A golden era for astonomy. And mugging".

I dunno, muggers actually seem to like to have light. Actually, what muggers want is a nice contrasty environment: good lighting on their victims so the mugger can pick out good prospects, and nice dark shadows for the mugger to hide in.