OK, so now that they've got the supertanker, what do the Somali pirates do with it? They anchor it close to shore and (probably) demand a ransom.

With few other options, shipowners in past piracy cases have ended up paying ransoms for their ships, cargos and crew ...

In Somalia, people on shore were stunned by the sight of the gigantic Saudi-owned vessel -- as long as an aircraft carrier at 1,080 feet.

"As usual, I woke up at 3 a.m. and headed for the sea to fish, but I saw a very, very large ship anchored less than three miles off the shore," said Abdinur Haji, a fisherman in Harardhere.

"I have been fishing here for three decades, but I have never seen a ship as big as this one," he told the Associated Press in a telephone interview. "There are dozens of spectators on shore trying to catch a glimpse of the large ship, which they can see with their naked eyes."

The pirates must be celebrities now. And why not become pirates? No one is coming to get the ship.

NATO said it would not divert any of its three warships from the Gulf of Aden and the U.S. Navy's 5th Fleet also said it did not expect to send ships to try to intercept the MV Sirius Star. 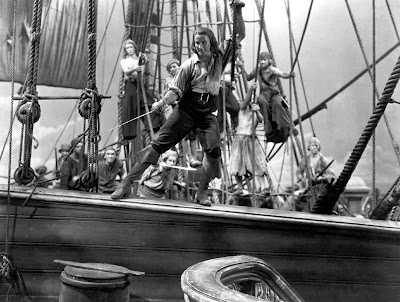 Humm,
so tell me what is the downside of piracy? If you pay the ransom doesn't that just encourage more of the same?

The downside happens when the ship owners get fed up and hire BlackWater to ride shotgun......

*gotta forgive me, too many years in spec ops...*

Well, if no one comes to get the supertanker + $100M cargo, then there's no downside at all.