We Need a Bailout for Big Pharma!

Yesterday's Wall Street Journal had a great page one story about the coming storm faced by the large pharmaceutical companies. Developing new drugs is a very risky business with most of their projects ending up with nothing. The few new drugs that actually make it to the market are sold with a very high profit margin to fund continuing research. These drugs are protected by patent law and can only be produced and sold by the company that produced them until the patent period ends and they can be produced by generic manufacturers. When that happens, the price of the drug drops quickly and the original manufacturer stops making much money on them.

The problem for big pharma companies like Merk, Pfizer and others is that their current pipeline of new drugs is very sparse and many of their cash cow drugs are about to fall out of patent protection. When that happens, these companies will suffer big drops in income and profits. They are already cutting R&D budgets and curtailing research in new drugs. 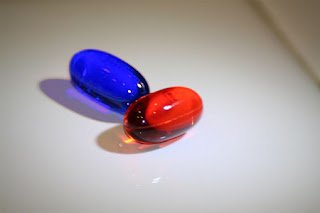 Hillary, these come from profits. How icky!
When that happens, what will be the response from the politicians? A bailout! We must guide medical research through tax credits and investments! Won't that be deliciously ironic? Right now, big pharma is the villain for the politicians because of their high profit margin on new drugs, a profit they use to make the next generation of new drugs. Not comprehending such complicated economics, people like Hillary paint them as greedy pigs just like they did to the big auto manufacturers years ago, manufacturers they now demand we bail out in order to save jobs.

The big pharma bailout. It's coming to a Congress near you.
Posted by K T Cat at 6:03 AM