Well, yesterday the National Review decided to endorse Mitt Romney for president. Aside from Mitt having the same chance of winning the general election as George McGovern, this was a smart move on their part. Who else would be so crafty as to board the Titanic while it was sinking? 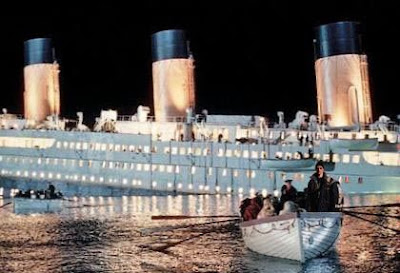 Here, the editorial staff of the National Review rows towards Mitt Romney's campaign headquarters to join the effort.
I have voted for every politician with an (R) beside their name in every race of every election for the past 27 years. If the party nominates that pandering, Clintonesque, white-bread, fantasist dorkwad Romney for the presidency I will quit the party for good.

I heard the editor of the National Review interviewed on a few shows and not once did he mention why they didn't endorse Fred. Pathetic.

Update: Don't think Mitt's campaign is the Titanic? Check out the comment thread on this post over at Hugh Hewitt's blog. The conservatives are viciously cannibalizing each other over theology. That comment thread shows exactly why Mitt can never win.
Posted by K T Cat at 10:29 AM

Dear KT Cat: If you leave the party due to a Mitt candidacy, where would you go?

I'd register as an independent.