Boy, Am I Ever Glad I Didn't Write This Article

...given the reaction I got to my previous comments about the destruction of certain civilizations under certain circumstances.

After you read the article, ask yourself this question. What happens when the "third-generation relative, an elderly grandmother or aunt, who also opens her home to several other wayward relatives" dies and is not replaced because there is no one in the next generation with the ethics and morality to replace her?

Update: This brings me back to a conversation I had in person and by blog with Captain Ed who wished that Republicans would just stop talking about sex. Find me any realistic solution to this problem that does not have traditional sexual morality as its cornerstone. While most of us are yukking it up watching Charlie Sheen bed one bimbo after another on Two and a Half Men and sneering at the squares who created The Dick Van Dyke Show, whole neighborhoods in America are turning into small versions of Mogadishu from doing just that. 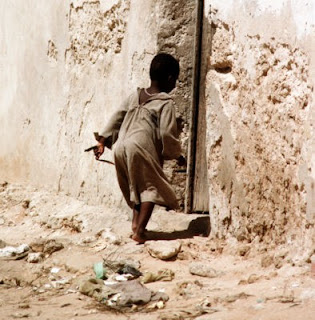 This is one of those times.

Of course, there aren't the opportunities in America that there are in Africa.

I bet you're glad you didn't write this one either. (Scroll to The wives, former wives and lovers at the bottom of the article to get the meat of the story.)