Why Gridlock Is Not The Answer

It's often said that people like gridlock in Washington because it prevents the government from doing anything dangerously big. I'd like to suggest that over time, gridlock leads to decline.

Why can't we build interstate highways any more? Why does high speed rail cost so much? Why have there been no nuclear power plants built in decades? Government regulations.

Regulations accrete upon the nation like barnacles on a ship's hull. Every year new laws are passed that govern every aspect of our lives from the food we eat to the contracts we sign to the way in which the government is allowed to spend money. Each regulation is tiny in and of itself, but taken as a whole, they act to make it harder and harder to accomplish anything. Each year you get less output for the same money.

While gridlock will slow down the creation of new monstrosities like Obamacare or Dodd-Frank, it will do nothing to eliminate the growing mountain of regulations. 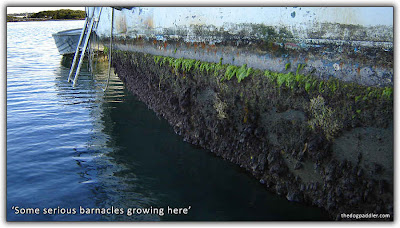 Full speed ahead!
Image source.
Posted by K T Cat at 6:16 AM

I think that the problem with the regulations is that they don't get eliminated, gridlock or no gridlock. When one party controls the government, it looks to me like they just spend their time pushing their own regulations. They may eliminate some of the other party's pet regulations, but only to the extent that they conflict with the new ones that the party in power wants to push.

At least when they are gridlocked, the ability to make *new* regulations is impaired.

What we really need, is a way to reward and encourage Congress for actually reducing, or at least simplifying, the morass of regulations. The problem is that reviewing all those regulations to flush out the ones that are counterproductive would be a lot of work, and no glory.

Tim, you are 100% correct. And the only solution is to write every regulation with a sunset clause.

But here's an incredible example... According to Wikipedia, the estimated completion date for the California High-Speed Rail project (if it ever gets full approval) is 2033 ("or later"). Astonishingly, the 1500 mile Transcontinental Railroad stretching from Omaha NE to Oakland CA, over at least two, and possibly three depending on the exact route, mountain ranges that I know of... took only six years (1863-1869). And that was in the middle of a labor shortage caused by the Civil War. And every spike was driven by hand.

And any fool who has ever dealt with the elusive Guccishod Tortsucker, a carrion bird native to the K Street / Enviroloon area in Washington DC that has migrated all the way west to Marin County CA, knows that 2033 is only the opening bid on a timeframe that will be dictated by every minor species of insect and dry puddle between San Francisco and San Diego.

That is why we need a Federal government. Think of the jobs that will be created.