My Take On The Glorious Romney Victory In New Hampshire

Unicredit, Italy's largest bank, is in trouble, in part because it loaned money to governments who spent it without return. There is massive capital outflow from Greece and all across Europe, the social programs that people have relied on, rightly or wrongly, are being slashed. Stories of human suffering from these budget cuts are only just starting. The Euros spent too much, borrowed too much and promised too much.

So did we. The same thing is coming to America. Johnson's Great Society, Bush's Compassionate Conservatism and Obama's infantile concept of the role of government were lies built upon borrowing future spending to feel good about ourselves today. It's all coming to an end.

Right now, our choice looks to be between a complete idiot who can't tell a freight train is about to hit him and this guy: 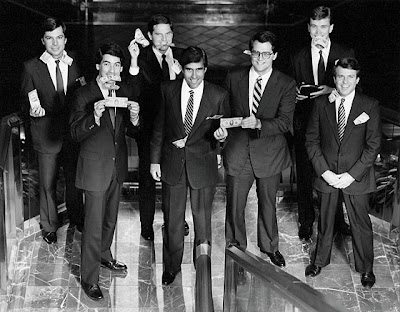 Here's someone who can relate to the common man and explain why Medicare is being slashed.
Romney / Obama is a recipe for societal conflict.
Posted by K T Cat at 5:50 AM

I'm with you. Romney is going to be a great big "Meh". I have no anticipation that he will stop and correct our runaway spending. I barely expect him to take the foot off the gas much less step on the brake.

Sadly Ron Paul is the only one who is anywhere close on what we need to do fiscally and he's a thorazine does away from insanity.

It's sad that I hear grumblings online and think to myself a second revolution and a march on Washington where we physically throw the congress, President and Supreme Court out and put new ones in is the only way we can survive.

Of course with all the new illegal laws and Executive orders being made, what I just said can get me a stay in Guantanamo.

I think Obama wants a match up against Romney as he sees that as a way to win a second term. God help us then.

Agreed. This is very demoralizing.

My point was that unless you have someone who everyone pre-agrees is a compassionate person, the austerity is going to seem like a punishment, a punishment that must be resisted by all means. We need a mix of Bill Clinton and Paul Ryan.

"I feel your unconstitutional pain....."

I made a similar argument to B-daddy. The best way to sell austerity to the Democratic California state senate is from a Democratic governor like Brown. The only problem is getting Brown to follow thru with it.

Kelly, while I agree with your "Only Nixon could go to China" reasoning, I do not foresee great leadership or resolve coming from either Brown or Obama with respect to entitlement reform.

It's simply not in their DNA to even consider mussing the hair of programs that are considered progressive golden calves.

Yeah, I'm with Dean. I don't think Obama even understands the problem and Brown thinks there's some wacky rabbit to pull out of his hat.