... is the only answer I can come up with when I wonder what in the world Obama and his crew were thinking when they decided they would force everyone to cover contraception, sterilization, etc. on their employee health plans regardless of their moral positions on the topic.

Seriously, are these things that big of a financial burden? Is there some sob story out there about a young family who lost their home and now lives in a cardboard box because they couldn't afford a diaphragm? Did I miss that one on 60 Minutes or PBS?

Our Monastery of Miscellaneous Musings and B-Daddy over at The Liberator Today have covered the freedom aspect of this quite well. Let's turn that on its head and try to figure out the rationale behind the new law.

Like I said above, there's no financial reason for it. There's no access reason for it, either. It's not like contraception isn't available down to the point where you can buy it in vending machines in the bathrooms at bars. It's not that there's insufficient education about the topic - they no longer read Charles Dickens, but our kids know all about condoms and the pill.

So what is it?

Jonah Goldberg, in his book, Liberal Fascism, suggests that fascism is a worship of the state, a secular religion with all the attendant moral architecture that suggests. That's the only explanation I can come up with for what Obama and Katherine Sibelius have done. They believe that contraception should be free and instantly available to everyone at all times. 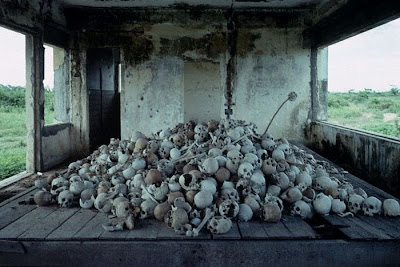 I am the State, thy god, and thou shalt have no other gods before me.
What did you expect from someone who is fine with allowing babies who survive abortions to die of exposure?
Posted by K T Cat at 5:37 AM

Thanks for the link!

This pre-occupation with death is puzzling, unsettling and depressing all at the same time.

Death is just a side-effect. The pre-occupation is with totally unfettered self-gratification.

The left becomes unhinged when the topic turns to sex. And they accuse us of being preoccupied with it.

"force everyone to cover [x] on their employee health plans regardless of their moral positions on the topic."

I don't know if this argument is the best. What if, instead of contraception, the complaint was by Jehovah's Witnesses who didn't want to pay into insurance programs that covered blood transfusions?

It seems to me that this form of argument would basically eliminate *all* health insurance, either by private corporations or by the government. I doubt that there is any medical procedure, drug, or treatment that *somebody* won't find objectionable, whether for moral reasons, or just because they personally don't ever expect to need it and therefore want to leave it off of their insurance policy[1]

[1] For example, I'm pretty sure that I'm covered for an annual Pap smear, but I really don't expect to ever need one. Does this mean I should try to get it removed from the benefits that my employer-sponsored health plan covers?

Tim, the issue is that the government is forcing every employer's health plan to include free contraception, instead of leaving the matter as an issue between the employer and the employees.

In a free society, an employer who is a Jehovah's Witness would be allowed to try and find a health plan that didn't cover transfusions, and his employees would choose between accepting the plan or working elsewhere.

(In a really free society, people would be responsible for getting their own health insurance, instead of depending on their employer, and they could tailor the plan as much as possible.)

Tim, I get the reductio ad absurdum logic of your argument, but I don't see how it applies. Medical procedures are called out by name in these regulations and contraception is not transfusion. It's not expensive, scarce or necessary for survival. Obama and Sibelius knew exactly what they were doing and who it was aimed at.

Why did they do it if not to force secular moral purity on Catholics and others? It dovetails in so well with Goldberg's thesis that it's like Jonah wrote the thing for them.

About the "not necessary for survival" thing: Pregnancy is kind of a big deal, and frequently dangerous[1]. Sure, if a married woman is likely to be seriously injured or die if she becomes pregnant again, she *can* just tell her husband that they will never have sex again. But realistically, she'd want to use some sort of contraceptive. And as women get older, pregnancies do get progressively more dangerous.

And I didn't actually mean it as a "reducto ad absurdum" so much, as pointing out that things look different from outside than from inside. You are approaching it as a Catholic, with the view that contraception is evil, and that therefore they are trying to force you to pay for an evil thing. But for someone who is *not* a Catholic, contraception is no big deal morally speaking, so why not cover it?

---
[1] I stood there helplessly at my wife's bedside for twelve hours while she went through progressively greater agony[2], before the doctor decided they weren't getting anywhere and so cut her open like a trout so they could unwedge my daughter and get her out. This is not something that I want to force women to do if they'd really rather not do it. She ended up having to be cut open twice more to get a second daughter, and then decided that three major abdominal surgeries was enough.

[2] Anesthetics aren't all they're cracked up to be, especially when you are at a small hospital that doesn't have 24-hour anesthesiologists on staff.

It's an access issue? Seriously? You can buy condoms on Amazon for 25 cents apiece plus shipping. I think you can manage that without insurance.

This was just an exercise of raw power by Obama.

By the way, I'm sorry your wife had a rough delivery.

More to the point this is about population control. Progressives do not know how to provide for more people, therefore those people should not exist. They have no clue when it comes to human value, self-reliance and ingenuity.

Any species run by progressive ideology will go extinct. You can quote me on that!

Your statement only makes sense if you assume that nobody actually wants children, and will only have them if forced to do so. And if you think that, then I have to assume that you simply aren't paying attention. Do you ever actually talk to anyone who has kids?

Tim, you keep missing the point. It is not whether contraception is or is not a good thing. The issue is that the government is forcing every employer in the country, including Catholic churches, schools, hospital, and social services, to pay for contraception, regardless of the violation it does to their consciences.

But for someone who is *not* a Catholic, contraception is no big deal morally speaking, so why not cover it?

But it is a big deal to some of us and there's no reason to have done this other to bring a dog to heel.

Actually, I see that I haven't been very clear about what my point is -

My point is that the only motive a number of you can think of, is that Obama hates Catholics and wants to beat up on them. But, I think it is far more likely that they originally just included it because they thought it was a good idea that wouldn't cost much. They hadn't really thought about what the Catholics would think about it, because *to them* the Catholic position on contraception sounds as strange as the Jehovah's Witnesses opposing blood transfusions. And now they are resisting dropping it, mainly because they are bureaucrats who love their rules and hate the idea of making exceptions to them.

I expect there's no particular malice involved at all, just carelessness and stubbornness.

Thanks, Tim, for clearing that up.

But, regardless of the motive, the policy is wrong, and that is why Catholics and others are opposing it.