How Is This Even Possible? 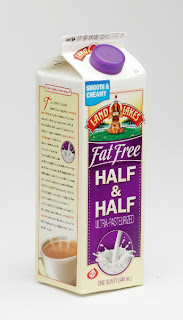 I've wondered about that sort of thing, too. Specifically the "fat-free sour cream" that is for sale these days (which I kind of suspect is actually thinly-disguised yogurt).

I guess it's OK, as long as it is prominently labeled "Fat Free" so everybody knows that the "half" isn't actually cream. I suppose I can put up with this sort of thing, at least until they start marketing "Fat-Free Lard".

Maybe they add chalk and crushed limestone to it to give it extra body.

It a wonder of modern food chemistry! you really don't want to know.

Seriously, it just looks like they thicken milk with carageenan and corn syrup until it has the right consistency.