Once The Money Is Out Of Politics

... we'll enjoy the fruits of a total dictatorship, assuming we can figure out what "getting the money out of politics" even means.

Our Monks of Miscellaneous Musings posted a George Will - Robert Reich clip from some debate show. Robert Reich brought up the claim that "we need to get the money out of politics" and blatted on about income inequality. On the latter point, George Will whiffed badly, but more about that later. 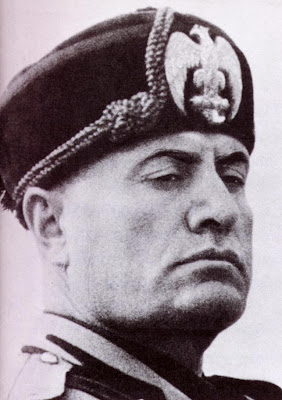 Sort of like Mussolini did. There wasn't much money in politics in fascist Italy.
But the best set of decisions depends on what you're trying to achieve. Over in Greece, they've pretty much done the things that Robert Reich has been suggesting for years and they're now starting to throw their poor and elderly out into the street. So much for finding wise political leaders who can make your decisions for you, eh Robert?

If we could just get the money out of politics, then Deep Thinkers like Alan Blinder could come up with more ideas like Cash for Clunkers.
And what does "getting the money out" even mean? The government contracts out to private companies for much of its work. If there's a customer out there with $3.5T to spend it's utterly childish to think that marketing dollars aren't going to gush forth in pursuit of that prospect. (You can solve this problem by nationalizing all industries so that everyone is inside the government and no one outside. See also: Union, Soviet.)

Finally, a bit of George Will's response to income inequality. George took the collective position and made points about government being the cause of problems and blah blah blah. This really ought to stop. Income and wealth don't simply happen to you. You're not plankton floating around with the tides. Income and wealth are markers of behavior. Next time a Robert Reich launches into an income inequality tirade, someone ought to bring up the behaviors that lead to poverty and ask Robert just how successful we've been at dealing with those through politics.
Posted by K T Cat at 8:26 AM

I think the shorter answer is to make politics powerless. If government didn't have such sway over every single aspect of your life there wouldn't be much point pouring money into it.

But why would power hungry elitists hell bent on proving their own superiority get into a political system that lacked the power to oppress and supress everyone else?

Tom, I have a saying that I don't know whether I made up or I stole that parallels yours:

"You will never get money out of politics until you remove power from government by corresponding degrees."

KT, thanks for the link.