The NYT, always a trusty source of bloggable idiocy, has come up with another howler of an article. Voluntary austerity, they claim, is killing Europe.

Despite criticism from many economists, though, most European governments are sticking to austerity plans, rejecting the Keynesian approach of economic stimulus favored by Washington after the financial crisis in 2008, in a bid to show investors they are serious about fiscal discipline.

Err, not really. It's not voluntary at all. They're not thumping their financial chests and flexing their fiscal biceps to try to impress the girls on the beach, they've run out of people to tap. In one syllable words, here's what's happening.

No one will lend to them.

But wait, there's more! Delving deep into the minor leagues, the NYT visits the Graduate Institute of Geneva to talk to "an economics professor." (How do they even find these places?)

“Every government in Europe with the exception of Germany is bending over backwards to prove to the market that they won’t hesitate to do what it takes,” said Charles Wyplosz, a professor of economics at the Graduate Institute of Geneva. “We’re going straight into a wall with this kind of policy. It’s sheer madness.”

Umm, it's not madness, they're just out of options, save for going Full Zimbabwe on the problem.

I love these articles; they're so totally disconnected from reality. They show how far the progressive education system has gone in removing the mental connections between earning and having in the culture. What's happening in Europe is simple mathematics - compound interest tables at work. It's nothing more than that and it's a total mystery to the NYT. 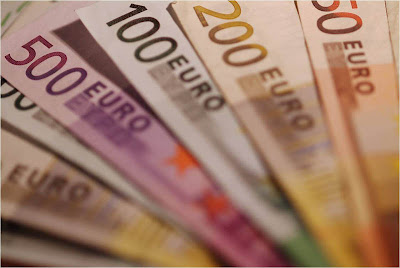 BRUSSELS: The European Commission regretted missed fiscal targets announced in Spain on Friday, but hailed the government's announcement of an austerity plan intended to slash the Spanish public deficit.

"I regret the sizable fiscal slippage" to a deficit of 8.0 percent of GDP instead of 6.0 percent initially targetted, Economic Affairs Commissioner Olli Rehn said, while welcomng the new meaures announced from Madrid.

Yeah, I saw that, too, Jeff. This is an iterative process and it would have been a miracle if they had got it right on the first try. At least they're trying to do the right thing.