Italy was in trouble. Big trouble. No one wanted to buy its debt any more. 2-year bond prices had spiked to more than 7%, a completely unmanageable level. Thanks to the glories of secular socialism, Italy has an aging population and noncompetitive industries. Italy was going bankrupt in a hurry and there was only one player left who had the ability and motive to buy their bonds. The European Central Bank (ECB).

When a central bank buys government bonds, it is printing money and handing it to the government to spend. 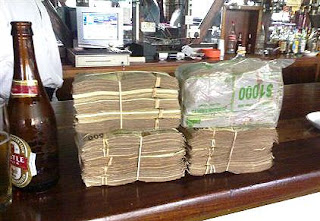 See also:
Zimbabwe, economic collapse of.
A central bank acting as lender of last resort is the clearest possible signal that the country is fiscally doomed. In the case of Italy, a fiscal collapse would wreak untold havoc on the European banks who hold hundreds of billions of Euros of increasingly worthless government debt. Run by clever people, the ECB found a (temporary) way around the problem. They printed gobs of Euros and loaned them to banks at 1%. After that, it was up to the banks to do something with the cash, wink wink.

Indeed, the problems are too far-reaching to be solved with a single measure from the bank's bag of tricks. But for all intents and purposes, the ECB's new strategy is just that -- a trick. By flooding the banks with cheap money, it is artificially generating demand for sovereign bonds. In doing so, it can also cut back on its own bond purchases, which have also been highly controversial within the bank itself.

For the banks, it's a fantastic deal. They can borrow money from the ECB for three years at the prime interest rate, which currently stands at 1 percent. If they used that money, say, to buy Italian bonds last Friday, they would get the much higher interest rate of 4.83 percent. Then they could turn around and deposit these bonds at the ECB as security, and borrow even more money at 1 percent.

This new ECB strategy would appear to benefit all the major players: the banks, the cash-strapped countries and the ECB itself. But it has also triggered worries that Draghi has merely created a kind of financial perpetual-motion machine. In any case, the strategy does nothing to alter the fact that the institution ultimately bearing the risks is still the ECB -- and, with it, the taxpayers.

Here's the plan in graphical form: 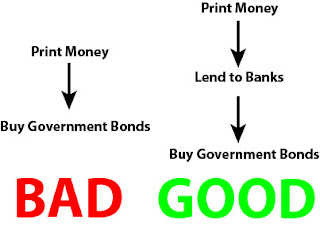 And thus, the ECB printed money to buy government bonds. The day was saved! Europe could go back to drinking little cups of coffee at outdoor cafes. Yay!

In a future post, we'll discuss why the banks ended up as suckers in this deal.
Posted by K T Cat at 10:59 AM

KT, I think by this point they've moved beyond espresso and have upped the ante with frenet-branca and uzzo.

I love graphs. Graphs are cool.

Hate to point this out, but our Fed has been doing both the "Bad" and the "Good" to monetize our trillion-plus-dollar government deficits.