If Italy Is In Trouble Then England Is Totally Hosed

Eternal sunny optimist Ambrose Evans-Pritchard points out some depressing facts about England's debt situation. Here's a tiny bit of what he has to say with the rest at that link quite worth a short read. 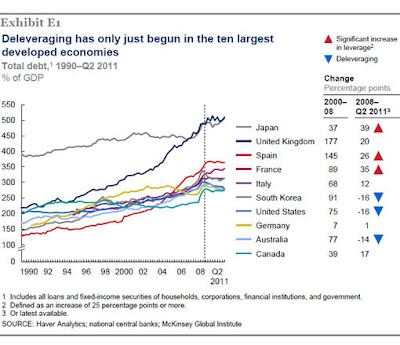 Over the last couple of years, while America's private institutions have been deleveraging (while the state has completely lost its mind), British entities, both public and private, have continue to borrow like mad until they are now in the same fiscal position as utterly doomed Japan.

Luckily, the English have all that lovely civilized culture to fall back on when the money finally runs out and the socialist paradise the Labor Party tried to create inevitably crashes into smoking ruin.

Oops. Britain and the Church of England abandoned their core moral principles in favor of relativism. Looks like they might be in for a wee bit of trouble.
Posted by K T Cat at 5:40 AM