Dig this bit about how the monster liquidity game being played by the Fed and the Obama Administration is screwing over the rest of the world.

Some officials in Asia are ... suggesting the Fed’s record-low federal funds rate -- the central bank’s interest-rate target for overnight loans between banks -- is pushing asset prices in their region too high...

The U.S. shouldn’t adjust monetary policy to account for rising Asian assets, Federal Reserve Bank of St. Louis President James Bullard said Nov. 18. “If there are problems in real- estate markets in Asia, it is not very practical to say you should raise interest rates in the U.S.,” he said. 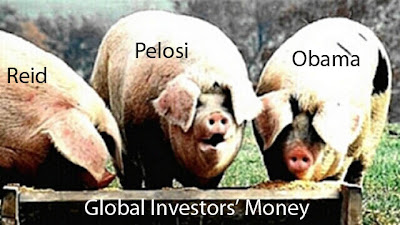 it is not very practical to say you should raise interest rates in the U.S.

Asians could start by refusing to buy any more of our debt, which helps to keep interest rates lower.

All this criticism of the lower dollar are extremely odd. The reason the Chinese buy our debt is to maintain unrealistic exchange rates that allows them to pour unrealistically cheap goods into the US.

If they let their currency float, the dollar gets cheaper, balance of trade equalizes, and the currency effects go away. You wouldn't let the Europeans dictate our defense policy, why are you going to let the Chinese and Germans of all people dictate US monetary policy.

The US is deep in recession still; the implied policies you have are lower government spending, lower consumer spending and tighter monetary policy; that's a most unusual prescription.

Anon, how are the goods unrealisticlly cheap? Their labor rates are less than a dollar an hour.

As for it being an unusual prescription, why is that? This is a debt-induced recession. More debt is going to ... what?

Jeff, that's the other shoe that's going to drop. Brazil is rightly concerned about their overheating stock market, driven wild by the dollar carry trade caused by our loose money policies. It's going to take coordinated action by several governments to stop supporting the low treasury rates. Even then, the Fed can just print the money out of thin air like they did last year.

Anon, the problem with these Keynesian comments you keep leaqving is that it's now been proven conclusively that Keynesian Economics doesn't work. During good times, we should have been running a surplus. The Republicans, other than when Gingrich was Speaker, didn't do this and the Democrats not only didn't do this, they blew the whole budget apart as soon as they took over the process.

The last two years of the Bush Administration, when the Democrats controlled the budget process, the deficits went way, way up and that was during good times. Borrowing some money during good times and then borrowing tons and tons of money in bad times is doomed to failure.

This concept that we can borrow and spend our way into prosperity is absolute nonsense. We've been doing that and all we've done is to delude ourselves that this prosperity is real. It's not. It's built on borrowed money that needs to be paid back. Like it or not, eventually we will pay it back, one way or another.