Robert Samuelson has a typically good piece today, uttering his standard warnings about the mountains of debt we're piling up. Within that essay is this nugget about Japan's even larger debt.

The same logic applies to exploding government debt. We have moved into uncharted territory and are prisoners of psychology. Consider Japan. In 2009, its budget deficit -- the gap between spending and taxes -- amounts to 10 percent or more of gross domestic product (GDP). The total government debt -- the borrowing to cover all its deficits -- is approaching 200 percent of GDP. That's twice the size of its economy. The mountainous debt reflects years of slow economic growth, many "stimulus" plans, an aging society and the impact of the global recession. By 2019, the debt-to-GDP ratio could hit 300 percent, says a report from JPMorgan Chase.

Numbers and percentages don't ever translate into normal human conversation very well*, so let's get a little more personal with this.

Here are the numbers for Japan in personal terms. Say you make $50,000 a year. You would have $100,000 of credit card debt. That debt would be increasing by $5,000 a year. That is, you would bring in $50,000 and spend $55,000. Since the Japanese government isn't buying real estate or anything lasting with it, this is not mortgage debt, but personal debt. For the most part, they are buying perishable items such as health insurance and social services. So in addition to whatever mortgage debt you have, you've got $100,000 on your credit cards and will have $105,000 of that debt next year.

Furthermore, you're getting older. Japan's long since gown below the replacement birth rate and their population is aging. Let's say you're about 51 years old. That means you don't have too much longer before you want to start considering retirement. With these simple facts, what can you predict about your future? Will you retire to that lovely home in Kyoto or will you be huddling over a bowl of thin gruel in a tiny apartment in Tokyo, wondering if you could survive the winter if you turned the thermostat down to 60? 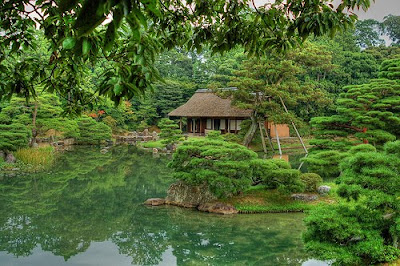 Your retirement home? Probably not.
Do you want to be 51 years old, making $50K with $100K of credit card debt? This isn't theoretical, either, this is really the way it is in Japan. I've been wondering about how they keep this Ponzi scheme going for quite some time. In some future posts, I'll be boring you to tears with a bit more delving into this.

* - Mish has a good take on this when he shows that even taking the Obama Administration's wild claims as hard fact, each Stimuloid Porkgasm™ job has cost us over $323,000.
Posted by K T Cat at 1:09 PM