On Sunday, our last full day in Santa Fe, we visited the Georgia O'Keeffe museum. It had been recommended to us by all sorts of people. We spent a bit of time walking through it, looking at her paintings and photos. I discovered that I don't really like her work. 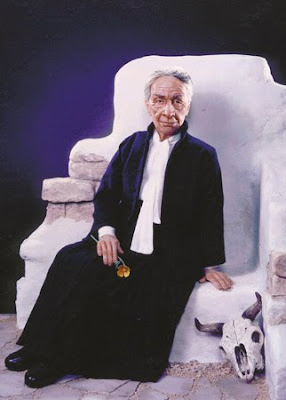 But I am smiling!
I found her work to be technically brilliant, but the mood was endlessly grim. Her quotes on the wall told us how much she hated art critics and maybe us, too. There wasn't a single warm smile in any of her photos.

Look, I get it. She was a woman artist in an age where such things were frowned upon and her art was heavily criticized at the time. Even with that, you wanted to shake her and say, "Get over it already!"